The government has just published its consultation on a new waste prevention programme (WPP) for England, with seven sectors targeted. The consultation’s 70 pages of policy contain the strategy that’s meant to show how government intends to reduce waste – the first thing it’s legally obliged to do according to the waste hierarchy.

However, the WPP is a Rorschach test for proponents and critics of voluntary agreements. Supporters see an industry-led, disruptive approach (with varying degrees of government intervention).“I think they have a real role in waste prevention,” explains Debbie Hitchen, who leads the sustainable production and consumption team at consultancy Anthesis. She suggests that voluntary agreements can even take businesses “beyond compliance”.

Sceptics see a “smokescreen” used to delay regulation. “They are meaningless unless there is an effective way to enforce companies to comply with them,” noted Changing Markets, a group that exposes irresponsible corporate practices, in an assessment of the plastic agreements published last year. It calls them “a tactic to successfully prevent effective regulation”.

As with all Rorschach tests, there is no one correct assessment. Indeed, proving the effectiveness of these commitments is far from straightforward. Some contain targets and commitments to measure and publish results; others amount to little more than a press release and a few roundtables. Some struggle to even get off the ground. Others, such as the Electrical and Electronic Equipment Sustainability Action Plan (esap) have not reached a consensus on targets. Many more fail to meet their goals.

If such agreements are going to remain a popular political choice during the next decade, don’t we need to know if they work or not? 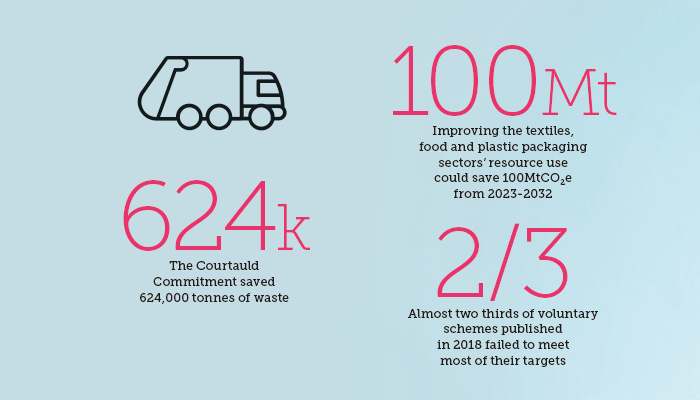 Around a decade ago, Wrap – a charity associated with resources and waste agreements in the UK – commissioned research to evaluate waste agreements. It never saw the light of day. “Over the many years and many different voluntary agreements we have managed, Wrap has regularly published extensive evidence of the difference they make,” says a spokeswoman.

In its 2021 WPP the government noted that the agreements in place during the previous programme, which ran from 2013-19, produced “good results”. There are nods to the Sustainable Clothing Action Plan (SCAP – “well supported by business”), the Courtauld Commitment for food and packaging (saved “624,000 tonnes of waste”) and the Plastics Pact (“industry has shown its willingness to lead and take action”). There is recognition of the struggles of other initiatives (such as esap), but the picture painted is generally rosy. Some experts have noted that the review was conducted by Wrap, which specialises in voluntary agreements.

According to the review, at least 387,000 tonnes of waste were prevented between 2013 and 2019 due to actions taken by organisations collaborating with government. That’s about 64,500 tonnes a year, 17,200 of which was attributable to government intervention. Libby Peake from think tank Green Alliance has noted that England generated 188m tonnes of waste in 2016, so the actions taken had “virtually no material impact”.

Proponents argue that 387,000 tonnes is better than zero tonnes. But an equally valid point is that voluntary agreements‘ impact has been too small and too slow. “I’m not a fan,” says Colin Church, CEO at the Institute of Materials, Minerals and Mining, and a former director at Defra. “In the worst case, all they do is provide a smokescreen for a few years.” However, he notes, “you do get the odd one that is extremely successful”.

Politicians have used the Courtauld Commitment as a pin-up for a decade. Lord Henley, a Defra minister in 2010, has called voluntary schemes "an important part of the drive towards a zero-waste economy," and cited Courtauld as a model. That it reportedly had a multi-million-pound budget and up to 10 staff to manage it certainly helped. So too did the target sector: around 75% of the grocery market could be captured with just a handful of signatories from the major supermarkets.

A voluntary agreement tends to work best when, in Church’s words, the government can “put its arms around industry” – and having a few major players (or a powerful trade association) makes this easier. Those involved in Courtauld also quickly realised the dual benefits of the initial scheme’s focus: reducing their packaging weight saved both money and the planet. The focus on packaging weight led food brands to use the more flexible plastic packaging that is now proving hard to recycle. There is also an argument that the financial incentives would have delivered similar reductions regardless of the agreement.

Indeed, determining exactly how much waste a voluntary commitment prevents is tricky. Wrap believes 2.7m tonnes of waste were reduced between 2015 and 2020 due to “actions which were being taken in the context of Courtauld 2025” (the latest iteration). Around a quarter of this – 624,000 tonnes – would not have been prevented without the agreement.

Liz Goodwin, director of food loss and waste at the World Resources Institute, was CEO at Wrap between 2007 and 2016. She says it took two years to encourage organisations to sign up to Courtauld. “There’s a ‘building trust’ phase when you need to demonstrate the ‘why’ to businesses,” she explains. This is easier to do now than 10 years ago, she adds, with companies “falling over themselves” to reduce plastics.

A place to hide

Voluntary agreements on plastic have popped up everywhere in the past couple of years. Changing Markets calls these “all talk and no action”. Of the UK Plastics Pact, run by Wrap under the Ellen MacArthur Foundation’s plastic economy global commitment, it says: “While promoters of the pact promised great ambition from its 127 signatories, a progress report from Wrap in 2019 (one year into the initiative) only provided updates on 45 of those companies.”

Some businesses do use such agreements as a “hiding place”, notes Goodwin, “but the vast majority are trying to do the right thing”. Aggregated data is often a bone of contention: critics say businesses can enjoy PR without publishing progress; those running agreements say it builds confidence. At some point, “comfort zone needs to be broken”, Goodwin says.

That doesn’t always happen. Wrap has been trying to encourage more businesses to publicly report food waste, but most are reluctant. Soon they will have to: the WPP reiterates the government’s commitment to introduce mandatory annual food waste reporting, with a consultation expected.

Voluntary agreements have arguably helped prepare businesses for this regulation. There is less of a shock to the system when regulation is preceded by industry-led commitments, says Jamie Fry, policy analyst at Zero Waste Scotland. “When there is a clear policy direction or intention to regulate, voluntary commitments can thrive – at least in the short term,” he says.

Dominic Hogg, director at environmental policy consultancy Equanimator, is sceptical of voluntary agreements – especially those that permit companies to sign up when targets or scope are yet to be agreed. However, he admits, those that are closely monitored, ambitious and align with upcoming regulation do have potential. “There is a responsibility on government to make it clear what they want to see happen,” says Fry.

This is what the WPP sets out to do. One agreement for 2021-2030, Textiles 2030, has just been launched for textiles. It builds on SCAP 2020 and will help prepare companies for extended producer responsibility. There are also powers in the Environment Bill that will allow government to set minimum clothing standards, and labels will help consumers choose sustainable clothes.

Textiles, food and plastic packaging are just three of the sectors targeted in the new WPP (the others being construction, vehicles, furniture and electronics). Together, they generate 77.1m tonnes of waste. Improving these sectors’ resource use could save more than 100m tonnes of carbon dioxide equivalent between 2023 and 2032. The government wants voluntary agreements to play a crucial role, but they remain a ‘Marmite’ approach.

On the whole, they have “very limited impact”, noted RSPB in an assessment of voluntary schemes published in 2018. Almost two thirds failed to meet most targets. Schemes implemented as part of a policy mix – for example alongside complementary regulations – or under a “credible threat” of regulation performed better.

“The world has problems governments can’t solve; we need the innovation of business,” noted Knut Haanaes, head of sustainability at the International Institute for Management Development in Lausanne, Switzerland, in April’s sustainable business report by Raconteur. “Industries collaborate, governments start to regulate and it becomes a virtuous circle.”

Do you think voluntary commitments are enough? To have your say contact: [email protected]