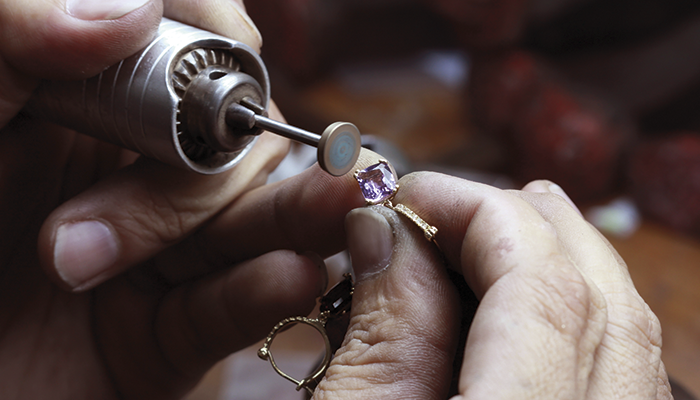 The UK jewellery industry continues to risk facilitating conflict, environmental damage and worker exploitation across the world, according to a study of eight top jewellers by Ardea International.

It reveals that just three of these companies fully meet the disclosure requirements of the 2015 Modern Slavery Act, while half do not have a modern slavery statement on their website’s homepage.

The study also highlights the limitations of other regulatory schemes designed to prevent the introduction of ‘blood diamonds’ to the market, and mitigate the impact of mining on communities, the environment and forced labour.

In response, jewellers are being urged to ensure their supply chains are properly mapped and audited, with a report from Ardea International saying companies must go “above and beyond” regulatory requirements.

“It is crucial that business acknowledges and addresses the risks of modern slavery in their supply chains to be able to take effective action,” it says.

“Corporate social responsibility policies and modern slavery statements have the potential to mislead stakeholders unless they address the shortcomings of sector regulatory standards.”

Six of the firms studied are members of the Responsible Jewellery Council, however, the report highlights reported loopholes within the certification process that result in jewellery that is “not always ethically produced”.

The regulation also includes weak environmental protection, allowing companies to dump mine waste into lakes and oceans, with no limitations on the amount of water and air pollution they create.

In addition, other schemes such as the Kimberley Process, designed to ensure blood diamonds do not enter the market, are criticised for having narrow definitions regarding what constitutes such a diamond.

Tiffany is an example of a business that goes beyond regulatory requirements to ensure transparency in their supply chain, only sourcing jewels from known mines and refusing to buy from countries like Zimbabwe and Angola.

Despite this, they remain implicated in the potential distribution of blood diamonds through links to the Beny Steinmetz Group Resources mining company, highlighting the scale of the challenge facing the industry.

However, the report highlights new EU regulation that will set out a uniform approach for supply chain due diligence, while the Modern Slavery Act and similar reporting legislation is thought to be driving companies to address these issues.

It says: “There is a move towards encouraging greater transparency, collaboration and better reporting as businesses acknowledge the complexity of the problem of modern slavery and related environmental impacts.”

“Business also needs to be supported by governments that respect the rule of law and help enforce laws where injustices are uncovered. The challenge of tackling modern slavery cannot be addressed without collaboration from all sectors.”