Earlier this year, researchers reported that ‘urban forests’ in 86 Canadian cities had removed 16,500 tonnes of air pollutants, potentially averting 22,000 cases of severe respiratory illness. Then, at the start of May, the World Health Organisation (WHO) published data showing that around 80% of people living in cities are exposed to harmful levels of air pollution. Later that month, the UK government published its latest Air Quality Strategy, in which tree planting was included as one way to improve air quality.

Cleaner air is one of the many benefits that trees provide, but it is only during the past decade that researchers have begun to better understand and quantify the multiple benefits – now often called ‘ecosystem services’ – that trees give us. A detailed, global mapping of the types and numbers of trees is an even more recent achievement. This particular project revealed that our planet plays host to about three trillion trees, and has space for another 1.3 trillion. So how valuable are the world’s trees, and what benefits would an extra trillion or so bring in terms of air quality and climate change mitigation?

If levels of air pollution are not bad enough to seriously harm trees, their leaves can do a great job of mopping up pollutants. This was shown in 2009, when researchers in London examined an urban 10km x 10km grid and found that trees removed about 90 tonnes of respirable particulate matter (PM), helping to avoid two premature deaths and two hospital admissions.

The following year, a team at the US Department of Agriculture (USDA) Forest Service in Syracuse, New York, examined how much PM trees removed in 10 US cities. The results showed that the trees in each city captured pollution by the tonne, with the health benefits for the largest city valued at up to $60m (£44.9m). In 2014, the same team quantified the benefits to air quality of forests across the US, and found that trees and forests removed around 17.4 million tonnes of air pollutants in total. This effect, in turn, avoided 850 premature deaths and 670,000 cases of acute respiratory symptoms.

A growing number of other studies are finding strikingly comparable results. In one of these, carried out in 2017, a team from Syracuse in the US and the University of Naples, Italy, used the same methods to assess the benefits of trees in 10 ‘megacities’ – those with a population of at least 10 million. Based on current trends, 10% of the world’s population will live in 40 or so of these megacities by 2030. The researchers found that trees provided several annual economic savings: $482m in health benefits due to pollution removal; $11m as a result of the trees’ water absorption decreasing the need for processing at wastewater treatment plants; $8m from carbon capture, and $500,000 from their cooling effect, which led to lower energy usage. Moreover, the team estimated that if all 10 of the megacities were to plant available spaces with more trees, these benefits would double.

These are the rewards of planting trees in 10 megacities; how many more trees could be planted worldwide to expand these benefits? To answer this question, we need to know how many trees there are already – but until relatively recently, an accurate answer to this question eluded researchers.

Estimating global forest cover from aerial photographs and satellite images is straightforward enough. In 2015, the UN Food and Agriculture Organisation (FAO), for example, relied on such techniques, reporting that 31.6% of land was forested. By 2015, the forested area had dropped by around 1% – equivalent to the size of South Africa.

Despite improvements in technology, tree number estimates have varied wildly. In 2015, a report in the journal Nature described the first research programme to successfully characterise and map global tree density worldwide. It was published by a team led by professor Tom Crowther at Yale University in the US. The research was inspired by Plant-for-the-Planet, an organisation that coordinates and motivates young schoolchildren worldwide to plant trees.

It was started in 2007 by a nine-year-old German boy called Felix Finkbeiner, who wanted to counter climate change with a global campaign of tree planting through a network of children. He soon attracted the attention of the German Environment Ministry and then the United Nations Environment Programme (UNEP). Plant-for-the-Planet then took on UNEP’s Billion Tree campaign to encourage tree planting, and, 10 years on, the organisation’s global register of planting records more than 15 billion trees. It has now set a target of a trillion trees, and the pace of planting is rising as more people get involved – from government bodies through to small groups and individuals.

“Plant-for-the-Planet found that environmental stewardship, and especially tree planting, were great ways to get people involved in tackling climate change – but at the same time, it did not know how many trees there were,” says Crowther. He was working in functional geography, so he and a large team of international collaborators set about compiling a global map of tree distribution and density.

“We developed a model using input data from forest surveys, soil types, topography, climate data and satellite images,” he says. Data from more than 400,000 local forest surveys worldwide, providing records of tree species and forest density, was then used to validate the model, allowing the team to extrapolate the results globally. “It was a case of adding up the pixels to get a global picture,” says Crowther.

In 2015, there were found to be around three trillion trees globally, the previous estimate having been 400 billion. When combined with historical data, the team found that the worldwide tree population had fallen by about 46% since the beginning of human civilisation.

“We estimated that we are losing 10 to 15 billion trees per year,” says Crowther.

The new tree density maps were invaluable to Plant-for-the-Planet, transforming the campaign by providing a context.

Crowther now heads a laboratory of researchers at the Swiss Federal Institute of Technology in Zurich. “Working at a global scale, our aim is to provide as much data, information, guidelines and tools as possible for reforestation, in a targeted, ecologically relevant way,” he says.

For example, there is a clear relationship between diversity and sustainability. Many believe fast-growing monocultures are a good investment and effective for rapid carbon sequestration – but research says otherwise. “The world’s forests generate about $600bn annually for the world’s timber industry,” says Crowther. “If we replaced those forests with fast-growing monocultures, we calculated that they would be worth about $400bn annually.” So diverse forests are better both economically and environmentally.

The Zurich team’s research also indicates that there is room for another 1.3 trillion or so trees globally. “We estimate these extra trees have the potential to absorb 6 gigatonnes (Gt) of carbon annually, while human activities are responsible for around 9Gt of carbon emissions each year.” So the extra trees could make a massive contribution to counter climate change.

Meanwhile, Crowther is heartened by the growing pace of tree planting, especially at local level, and says it’s important to protect what’s already there. “Smaller groups and individuals collectively have a huge impact and inspire others to plant trees, but we also need to take better care of the forests we already have,” he says. 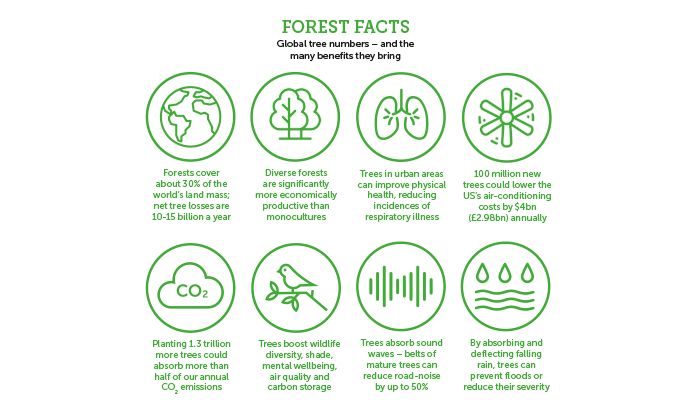 Rick Gould, MIEMA CEnV is a technical advisor at the Environment Agency. He first planted a tree in 1976, and most recently in April, with trees provided by the Woodland Trust