The shape of things to come Drones are at the forefront of tackling some of the greatest environmental threats of our time, rapidly transforming scientific research across the world. Chris Seekings reports...

From flying taxis to parcel delivery services, there appears no limit to the potential applications of drone technology as we stand on the brink of a digital revolution.

But you don’t have to look far into the future to witness the transformational impact of drones, which have evolved rapidly since being considered little more than a novelty just a decade ago.

Increasingly able to think for themselves through the use of sensors, drones can now enter environments beyond the reach of humans, whether on land, underwater, in the air or in space.

This has had dramatic knock-on effects for scientific research around the world, with sustainability experts taking advantage of the technology for environmental protection use.

Robert Garbett, chief executive of Drone Major Group, explains how this technology covers a vast array of areas, from monitoring wildlife and pollution levels, to replanting trees and mitigating wildfires.

“That is just the tip of the iceberg,” he tells me. “The applications for drones around environmental protection and monitoring are huge, it just goes on and on.”

Indeed, after just a little digging, I unearth thousands of environmental uses that the scientific community is just beginning to discover (see below).

“Whatever the environmental issue that you can think of, a drone can probably be used to help solve it,” Garbett adds. “The evolution of unmanned vehicle technology (UVT) is moving very quickly.”

One of the most cutting-edge applications of drone technology is the ability to identify different species on the ground using infrared cameras. The drones are able to generate unique thermal profiles based on the different ways animals radiate heat from their bodies. This has allowed researchers at Liverpool John Moores University (LJMU) to keep tabs on different species across large game reserves, and, crucially, detect and reveal poachers in a way that would have previously been impossible. “Drones can be designed to be incredibly quiet and flown at hundreds of feet above the ground so they are almost undetectable,” Dr Owen McAree, LJMU senior research officer, tells me.

“A manned aircraft would give the game away, but these drones can monitor vast areas of land in relative silence, and send a text message to a game warden alerting them to poachers in a particular area.”

The technology is also being used as a new way of monitoring the activities of animals, with LJMU researchers recently flying over large nature reserves in Malaysia to observe the nesting behaviour of orangutans. McAree explains how this would have previously been done from the ground, providing an incomplete picture of their behavioural patterns, owing to the height of the nests in the trees. A manned aircraft would have been “prohibitively expensive” to use and ineffective as they would have had to be flown so high as to not disturb the orangutans.

“With drones, you can fly them a few hundred feet above the trees and the animals don’t seem to mind,” McAree continues. “We can now get a lot of really great data on how their nesting behaviour changes over time that we wouldn’t have been able to before.” 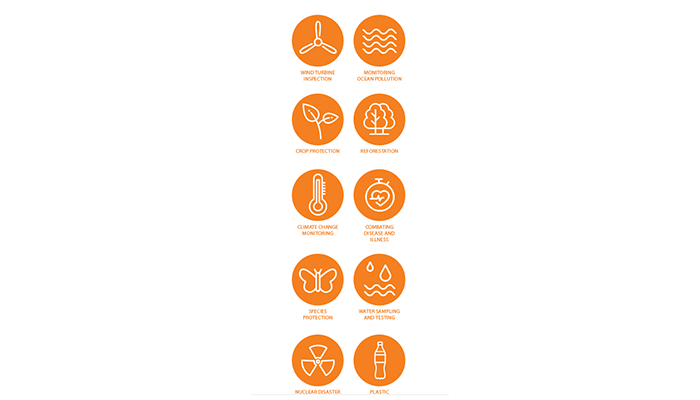 Another application involves using marine drones to monitor the state of the ocean by sampling its chemical composition and keeping track of fish stocks. However, there has been an explosion in the number tackling plastic pollution in recent years. This coincides with a mass public awakening around the impact of plastic entering the marine system, with litter recently found to have settled an astonishing 36,000ft below the surface of the Pacific Ocean.

Designer Elie Ahovi’s answer to this is his ‘Marine Drone’, which travels underwater and sucks up plastic bags, bottles and other debris into a net-like trap at the back end of the device. It is equipped with an infrasound system and a special sensor that keeps fish and other aquatic animals away, while high-powered batteries allow it to stay in the water for more than two weeks at a time.

The RanMarine project in the Netherlands is another initiative that aims to cut down on ocean plastic waste. Inspired by the natural way that whale sharks catch prey, the company has developed a drone that can filter up to 500kg of plastic waste at any given time.

The idea came after the project’s chief executive officer, Richard Hardiman, grew frustrated at the ineffective methods available for removing plastic from ports and harbours.

He hopes his company’s solar-powered ‘Waste Shark’ drone will eventually help “clean up the mass of ‘plastic soup’ suspended in the world’s oceans”.

“It may sound strange to say for an entrepreneur, but my mission will only truly be accomplished when I am out of business,” he adds. 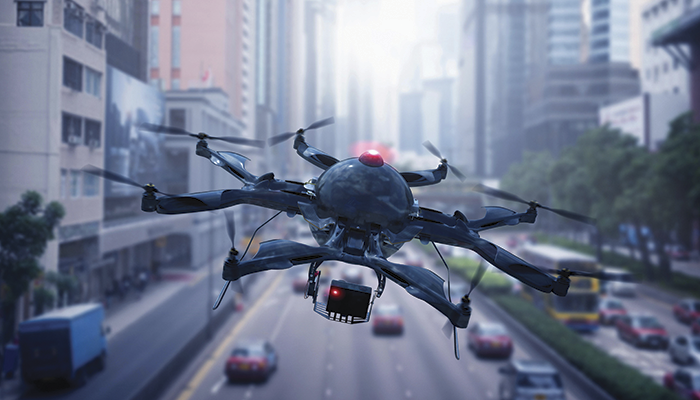 The most striking way drones have evolved in recent years concerns their ability to operate in multiple environments. Engineers at Imperial College London (ICL) have developed a drone that can dive from the air into the ocean like a gannet bird, before using compressed gas to propel itself back out of the water, where it can then fly away using retractable wings.

AquaMAV is designed to monitor water quality in reservoirs and changes in ocean salinity to gauge the effects of climate change, providing a game-changing solution for scientists looking to carry out research in harsh environments.

“During an emergency scenario such as a major oil leak, an AquaMav could fly and dive into isolated patch of water, where it could collect samples and record environmental data,” says ICL’s Aerial Robotics Lab director, Dr Mirko Kovac.

“The vehicle could then perform a short take-off and return to its launch site to submit samples for analysis. This would enable a fast, targeted response that could not be matched by current methods.”

This is one of the most exciting areas for the future of drone technology, with Garbett suggesting that the barriers limiting the reach of UVT are increasingly falling away. He describes how there are now 56ft drone catamarans that can travel across the world’s roughest seas for 100 miles carrying air drones, providing an integrated system to cope with various environments.

“That blurring of the lines between environments is the most exciting thing,” Garbett says. “These are not underwater drones, land drones or air drones – they are hybrids, and that is what we are going to see more and more of in the future.”

“You have to remember that a drone is any vehicle or aircraft that is autonomous or remote controlled, so that goes across the entire environment – the things that are possible are astonishing.” 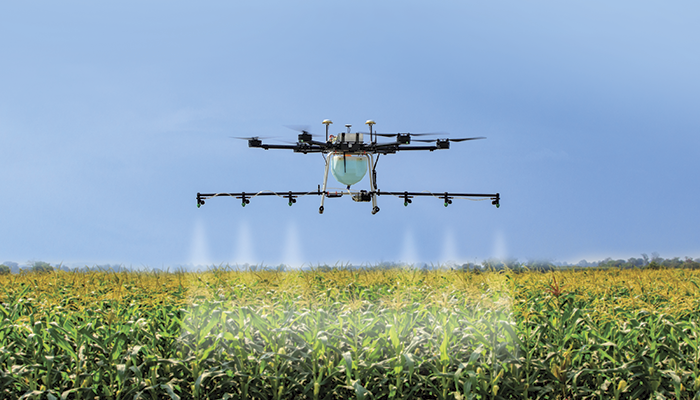 The environmental applications for drones appear endless, with their low-carbon emissions also enabling them to monitor pollution levels in a way that other devices can’t. Meanwhile, the relatively cheap price tag justifies the risk of them becoming damaged or destroyed in dangerous scenarios.

McAree points out that we are very likely to see drones operating across a vast spectrum of services, including delivering life-saving medicine to remote areas, or even defibrillators for when emergency services are stretched.

The technology is expected to transform our society in many ways, from disrupting the job market to ensuring all travel is autonomous and smooth, with traffic jams potentially a thing of the past. But at what price? “We may witness thousands of Amazon drones or advertising devices flying around in the sky, and that could seriously infringe on people’s quality of life,” McAfee says. He believes that an unmanned traffic management system – a type of air traffic control – could be needed to deal with the increased traffic of drones, with trials already taking place in the US and the United Arab Emirates. There is also the possibility of CCTV drones entering the skies, further encroaching on people’s privacy, with the population increasingly unable to evade the watchful eye of the state.

“From a technological point of view, these are all possible, but do we want all this stuff? I am happy to see drones used for scientific study, conservation, and emergency services, among others, but I would never endorse the principle of anyone being able to put a camera in the sky.

“Drones have opened up a whole area of discovery, but, on the flip side, there are ethical questions that society will ultimately have to answer.”

Thanks for visiting TRANSFORM. Articles on this site are usually limited to IEMA members, but are open access for this month only (June 2018). If you want to get full access to the site and much more then join IEMA today. Click here to start the journey.