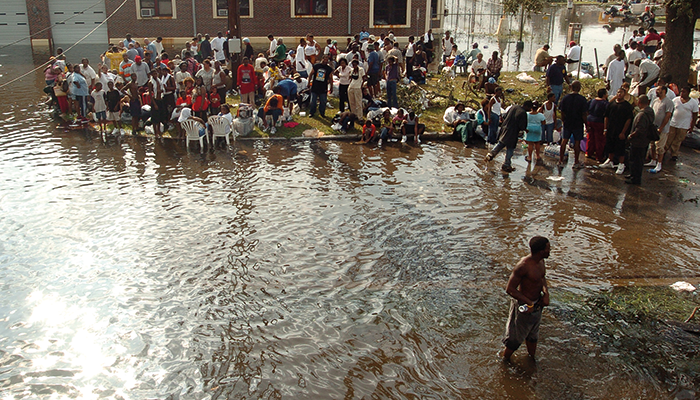 Each year, a staggering 21.7m people are displaced by extreme weather events across the world, stripped of their homes, families, friends and livelihoods. This is the human face of climate change. Their stories are rarely heard and their faces seldom seen, with most in the West oblivious to the untold traumas that global warming has helped inflict on some of the world’s poorest people.

But with the planet continuing on a path towards 2˚C of warming, and weather catastrophes increasing in frequency and intensity, richer countries could soon be forced to confront a migration crisis of biblical proportions.

After travelling to some of the world’s toughest and most remote regions, the Environmental Justice Foundation (EJF) has shone a global spotlight on the first-hand accounts of ‘climate refugees’ fleeing environmental destruction.

Although most migration caused by extreme weather has so far been contained within individual countries, this will increasingly spill across borders as people from warmer countries head north, explains the EJF’s co-founder Steve Trent.

Mass migration carries its own social risks, as we have seen with the migration wave resulting from the Arab Spring and the Syrian Crisis. As a result of the Syrian war, 6.6m people have been internally displaced, nearly 5m are refugees in Turkey, Jordan and Lebanon, and 1.2m are refugees in Europe. The latter may have signalled the beginning of the end for the continent’s most powerful politician, Angela Merkel.

“It certainly helped drive extreme populist movements across Europe, and led to a fracturing of consensus and very serious political uncertainties,” Trent says. “This could ultimately spill over into conflict, but the world is just burying its head in the sand – no one wants to talk about these incoming people.”

By way of comparison, 2015 disasters brought on by floods forced 8.3m people to flee their homes, storms displaced 6.3m, and around 87,000 people were displaced by wildfires.

The problem, Trent explains, is that many in the West believe the severe impacts of climate change will only be felt in foreign countries, far in the future. He describes this belief as “profoundly wrong and short-sighted”.

It is easy to forget that, just 13 years ago, Hurricane Katrina left 800,000 in the US homeless – and 1,800 dead. “This was arguably the largest forced migration in American history, yet the president of the world’s wealthiest and most powerful nation was frozen in action.”

And while some still challenge the scientific consensus, a report published last year by the Energy and Climate Intelligence Unit revealed that 41 out of 59 research papers published on the subject since 2015 had found a positive correlation between climate change and extreme weather.

“The simple fact of the matter is that climate change will increase the frequency of these events and make them more serious,” Trent says. “And if we see many tens of millions move towards Europe, the economic and social consequences could be profound.” 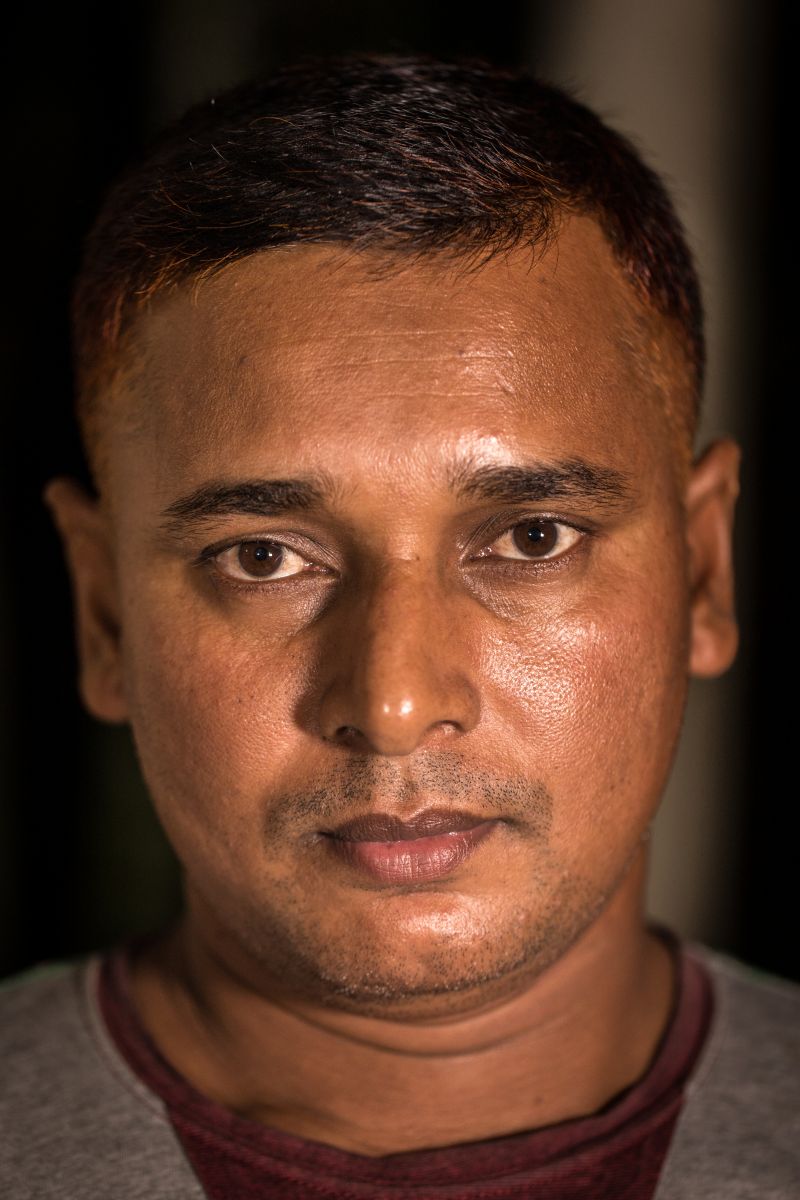 To raise awareness of the issue, the EJF has produced a series of powerful photographic‘portraits’ documenting the stories of victims fleeing extreme

weather events. One of these stories is Abdul’s (pictured right). Abdul’s entire farm was submerged when Cyclone Aila devastated Bangladesh in May 2009. He watched in horror as neighbours perished. When disease broke out, Abdul was forced to flee his village of Gabura and seek a new life in India, before returning to the Munshiganj district and finding work as a labourer. After 18 months he set up his own business and began to thrive, but this just attracted more problems. “The people in this area are jealous now,” he explains. “Who is this random man that arrives as a refugee and is now living so well?”

His new neighbours contacted the police and accused Abdul of being part of an extremist Islamic political party. He was forced to pay them off, and was left once again with nothing.

“Are we really any better off or are we in hell?” he asks. “We didn’t want to leave our motherland, but we had no choice – climate change was mainly responsible. “Developed countries do what they like – polluting, conducting scientific experiments with the climate – and we are the ones paying. If they could change their ways, perhaps people like us can be saved.”

A way of life under threat 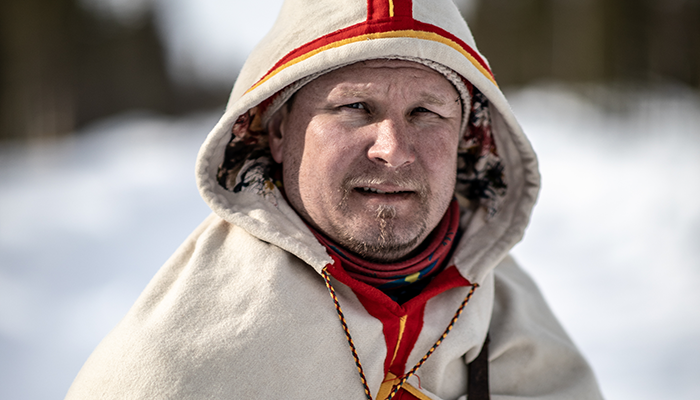 But it is not just leaving behind their homes that the most vulnerable to global warming have to contend with. The Sami people of Northern Europe face their entire livelihoods being wiped out. Lars-Ánte (pictured left) has been herding reindeer in Sweden all his life, just as his forefathers did before him. His people have an innate understanding of how the seasons impact the landscape and allow for safe passage.

“Our ancestors, our language, our culture, the reindeer, they are all entwined, but Sami people can’t recognise the weather patterns anymore,” Lars-Ánte says. “Reindeer can’t find any pasture for grazing in the winter months, so herders have to watch them starve. There is too much ice or the wrong kind of snow.”

While previous generations had enjoyed 30 years of good grazing conditions followed by a couple of bad years, today, the favourable weather lasts no longer than a decade before another 10 years of hardship take hold. “And it isn’t only reindeer, it’s everything in our nature,” Lars-Ánte’s says. “In the beginning, there was a kind of tranquility to the landscape, it was not under pressure, but now you can feel all the wildlife struggling.”

His people face deforestation and mining projects that deplete natural resources and leave the land barren, while heavy polluting industries have caused black snow to fall from the sky.

“Climate change is global, but people who live in big cities, what can they know about nature? They live their whole lives without ever seeing what is actually happening to the world. This is the problem, they are out of touch.” 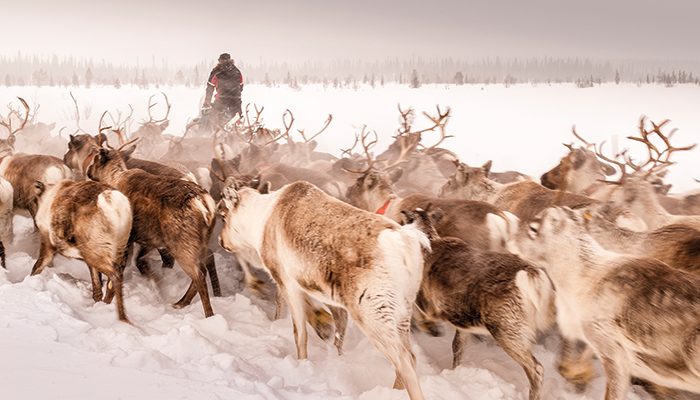 Facing up to reality

Oxfam estimates that the world’s richest 10% produce half of the planet’s carbon emissions, while the poorest 3.5bn account for just one-tenth. Trent argues that it is richer nations’ responsibility to ensure that those disproportionately impacted are protected.

“These people do not have the resources to protect themselves,” he says. “Those that have benefited least from industrialisation will be the hardest hit by its effects.”

The EJF recommends that the UN urgently develop an international agreement clarifying the rights of those impacted by climate change and ensure their protection through clear legal definitions.

Distinguishing between climate refugees and those fleeing conflict or economic hardship will be difficult. Trent says cooperation among nations will be crucial, and argues that engagement with affected communities will also be needed for social cohesion. “Even if you just look at this from a self-interested point of view, there is value in defining a coherent and collective response that is compassionate,” he adds. “Giving these people rights and status is important.”

The EJF argues that all countries must rapidly implement their Paris Agreement commitments, raise their emission reduction targets, and help boost resilience and adaptation in nations that are most affected.

“If you look at the latest Intergovernmental Panel on Climate Change report, 2˚C of warming will create a graveyard for entire ecosystems, communities and countries,” Trent says. “This is going to affect us all – our children and their children – and on those grounds alone, we need a trans-boundary response.”

The river took it all 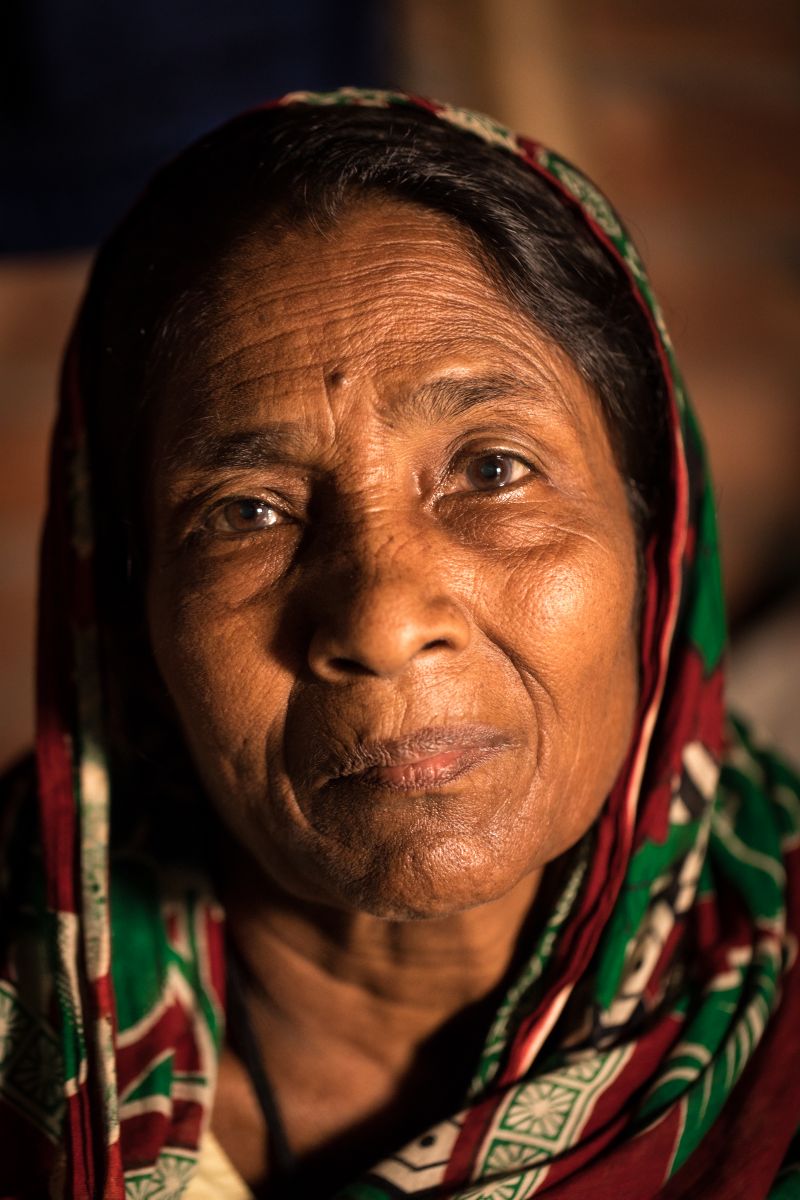 One of the most harrowing stories documented by the EJF is that of Renu Bibi (pictured right), an 85-year-old woman forced to migrate to Dhaka after rising river levels and erosion destroyed her home. Large ships now sail through the place where she used to live. Date palm trees, livestock and ponds full of fish were all lost to the river in the space of just 24 hours after a dam broke.

On arrival in Dhaka, Renu and her family slept in a tent made from paper found on the side of the road, and collected bottles and metals to sell for very little money.

Her children have all left following the death of her husband, and Renu is now forced to live in an abandoned old room that used to house another family’s goat.

“The weather here has changed too,” she explains. “It rains more frequently than it did, and water pours into my room, around my bed, and the drains overflow. The heat has also become intolerable. I sit here in the dark and think of the home we had – the lands, the trees, the fish. All of it has been taken away. My whole life was washed away by that stream.”

Trent hopes these human stories will inspire others to face up to the reality of global warming and extreme weather, with some estimating that 1.4bn people could be displaced by 2060.

“All too often, climate change has been explained with the image of a polar bear,” he says. “And while I care passionately about polar bears and our wildlife, I think that the image of people being forced from their homes is very powerful.

“This is about engaging hearts and minds, and I hope people decide to get educated and learn what’s going on – this is an issue of human rights and justice.”

To find out more about the EJF’s work with climate refugees, visit here.