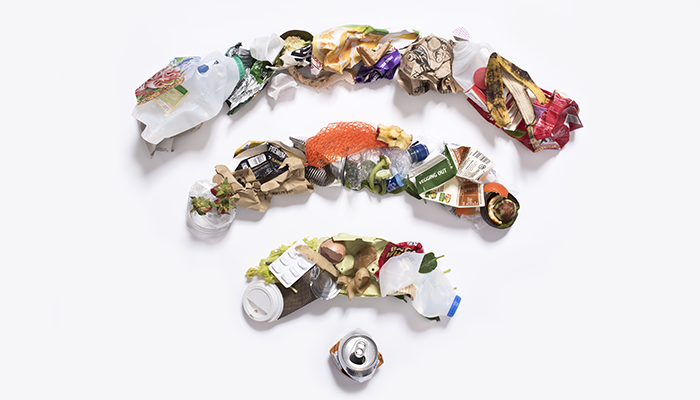 David Burrows looks at how technology is transforming the waste sector.

Imagine a world where self-driving trucks collect your waste only when bins are full – city-wide routes would be optimised, traffic reduced, emissions cut and money saved. Now imagine that you are then sent an instant message with your personal recycling record – including a pat on the back and a council tax discount if you’ve upped your game, or a scolding and a higher bill if you’ve let things slide. And there’s no excuse for contamination, because you can use the smartphone app to scan packaging so you know exactly which bin to use.

This might seem fanciful, but it’s closer to reality than you might think. “The emergence of the internet of things and ‘smartcities’ means that rubbish collections will become automated and more efficient,” noted experts in ‘From Waste to Resource Productivity’, a report published by the Government Office for Science in December 2017.

It highlighted work being done by Swedish recycling firm Renova and Volvo to develop a robot refuse truck guided by an autonomous drone that automatically collects and empties bins kitted out with sensors. But that’s not the half of it: once data is being collected from bins, the systems become even more efficient, predicting waste generation rather than merely responding to it. These so-called smartbins could, for example, give real-time data on content and fill status, offering councils and waste contractors the chance to design more resource-efficient collection systems, as well as smarter forms of materials collection.

Again, this is already happening.

In Dublin airport, for example, there are 300 new bins with wireless, ultrasonic, fill-level sensors that feed into a cloud-based monitoring and analytics platform. This means the team can map and monitor the airport’s waste by the minute, which has had a significant impact on costs: instead of collecting 840 bins four times a day, it’s now just 80 a day. They have also used the system, designed by Korean company Ecube Labs, to predict peak times, so they can deploy staff accordingly and keep a close eye on recycling rates.

These days, data is everything. As Viktor Mayer-Schönberger and Kenneth Cukier, authors of Big Data: A Revolution that Will Transform how We Live, Work, and Think, put it: “Once we ‘datafy’ things, we can transform their purpose and turn the information into new forms of value.” But what’s the appetite for applying this technological revolution (the fourth industrial revolution), with its data, artificial intelligence and 3D printers, to the waste management sector?

The International Solid Waste Association (ISWA) recently tried to find out. A global survey of 1,000 of its members showed that 50% think it will have a major impact on their businesses come 2030 – by which time 62% also believe there will be chatbots to help people better manage their waste. Four in five also predict there will be fully robotic waste sorting within the next 12 years, and more than one in three (38%) think waste will be collected by robots.

ISWA suggests the results show the waste management community is aware of change coming but underestimating how fast it will happen. In the eight months it took to compete the report, the first driverless waste collection experiment was successfully completed, 3D printers were used (experimentally) for the management of recycled plastics and more smartbins were launched.

Reflecting on some of ISWA’s findings, Karl Vrancken, an expert at cleantech and sustainable research firm Vito and professor in the bio-engineering department at the University of Antwerp, says the waste sector is “clearly aware” of the changes ahead, with sensors and robots expected to revolutionise waste sorting and recycling. “But, in order to drive and allow this impact, development and investment in big data and artificial intelligence is necessary,” he explains. “This is not yet in the comfort zone of the waste sector.”

It’s easy to see why. The waste management sector has come a long way in the past decade, with many businesses rebranding as resource companies reflecting that they don’t just bury everything in holes in the ground anymore. However, it remains a conservative industry, dealing in low-value materials on tight margins. Councils have also been pummelled by the treasury’s austerity stick, so rolling out a new wave of high-tech bins across a city to encourage recycling on the go isn’t likely to be a priority.

But should it be? “The biggest issue is mindset,” says Giles Bailey, managing director at Stratageeb, a strategic innovation company based in London. “Waste is an important industry and a very expensive service for local authorities, so, by not focusing on innovation, they are missing out on a major opportunity.” The fact that councils and contractors may not have any idea if a bin is full until they pass by is “so last century”, he adds.

But councils are removing street bins rather than putting more in – contamination is high and so are maintenance costs. According to a survey of 100 UK local authorities published in December by plastics recycling charity Recoup, the cost versus benefit of new ‘binfrastructure’ just doesn’t add up – despite the fact that councils spend an annual £1bn cleaning up the 2.25m pieces of litter dropped every year.

The government is under pressure to do more. A deposit return scheme for plastic bottles, for instance, will reduce litter and boost recycling, say campaigners. Last month, the Commons Environmental Audit Committee (EAC) also called for the introduction of a 25p charge on disposable coffee cups. The MPs said the ‘latte levy’ would encourage people to buy reusable cups – 2.5bn single-use cups are used every year, of which only 1 in 400 are recycled, and 0.5m a day are littered.

Critically, the revenue generated could be invested in new street bins and infrastructure, which town halls would welcome. As Lee Marshall, chief executive of the Local Authority Recycling Advisory Committee, told the EAC: “Few local authorities have on-the-go recycling schemes, and, in the ones that do, the quality of material they get is very poor.”

Could technology help? Cambridge Consultants has been combining machine vision with machine learning to develop bins that can be ‘trained’ to recognise new items over time – for example, the difference between a recyclable coffee cup and a compostable one – and thus reduce contamination levels. Rather than smart-tech, it’s actually quite simple, says Catherine Joce, who has been working on the project, although there’s a fair way to go before it could cope with all the items thrown at it in a high street. Joce can’t see cash-strapped councils investing just yet, but the technology is improving rapidly.

The concept could work well in a semi-closed environment like a store, shopping centre or a stadium, though. The likes of Starbucks, Costa and McDonald’s could offer loyalty points or vouchers for customers who put their cup or burger bag in the right bin, and keep track of their progress over time: “Thanks for helping to save Xg of carbon and recycle Xg of packaging in the past three months.” The customer feels good and the company shows it is operating responsibly.

Technology could certainly be a neat way to engage the public, especially since recycling rates continue to stagnate and contamination levels remain high. But what about privacy issues?

People are used to giving brands their personal data, but they are less willing to have smartbins at home. Councils started putting microchips in bins around 2002 in order to look at the potential for charging for waste collections by weight and incentivising recycling. However, the concept died away, thanks to stories of increased fly-tipping and local authorities spying on residents.

Bailey says he can’t believe that in 2018, we don’t know how much we recycle every week, or how that compares to the rest of the area. He says it needs to be made clear why the technology is being put in the bins and how it will help people. “If I am not using the bins and not chucking away as much and it’s cheaper, then I’m happy.”