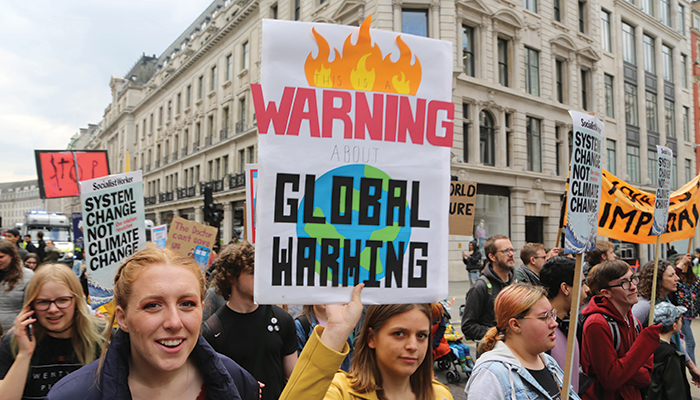 Many UK local authorities have declared climate emergencies, says Peter Gudde – but what actions are they actually taking?

More than 69% of local authorities in the UK have declared climate emergencies, choosing to make their own local commitment following the IPCC's Special Report 15, published in 2018. The extent to which these declarations are successful is of profound importance to the success of national climate change and energy policy.

Local authorities have wide-ranging influence when it comes to shaping energy planning and carbon reduction in their localities for the long term. However, there is no clear legal duty requiring local authorities to tackle climate change, and the drive to declare climate emergencies raises several questions. How coherent is the response? How is this translated into action? Where do citizens fit into the declaration process and subsequent shaping of action plans?

The basis of our study is anchored in the Climate Emergency UK database (www.climateemergency.uk). Using this as a starting point, we analysed each of the 281 local authorities that were listed (as of May 2020) in order to assess their declarations, using official records and other information on their websites. We then took a cross-section of 42 local authorities to assess their approaches. Our sample allowed us to review what progress, including financial commitments, had been made, as well as the approaches taken toward engaging civil society.

There are 408 UK local authorities, from district and county councils to unitary authorities, combined authorities and city regions. They have statutory responsibilities for ensuring citizen wellbeing in their areas and undertake a range of functions, such as promoting economic growth, spatial planning, transport, health and social care, education, housing, leisure and culture, tackling fuel poverty and environmental protection. Climate change and energy touches all of these areas. However, their ambition and effectiveness in addressing these issues vary.

The decision by many councils to make declarations has not been a product of conventional institutional frameworks, shaped and orchestrated by political parties, trade unions or established NGOs. Rather, a key factor has been a citizen-driven movement manifested in popular protest in towns and cities across the country and witnessed internationally.

Almost 50 years since the Club of Rome's seminal report The Limits to Growth, and shortly after its 2018 Climate Emergency Action Plan, the international activist group Extinction Rebellion (XR) was established. Alongside key individuals such as Greta Thunberg, XR helped to shape the tone of citizen participation with its call for governments and politicians to “tell the truth“, form Citizens' Climate Assemblies and deliver urgent action to reduce greenhouse gas emissions to net-zero by 2025.

The bulk of local authority declarations published to date were made between December 2018 and October 2019. Figure 1 shows this trend in relation to key climate-related activity since COP21.

Contents of the declarations

Of these local authorities, 86 (31%) have elected to declare a climate emergency relating to their own operations, while 168 (62%) included the wider community. The remaining 27 were unclear about the scope, or no information could be found. This is broadly comparable with research published this year by the Association for Public Service Excellence (APSE), which showed 48% of local authorities adopting locality-wide approaches.

Of the local authorities that have set a net-zero target date, 165 have committed to 2030. It is notable that at the time of declaration, only six (2%) stated that they had a published delivery plan directly addressing their net-zero commitment. Typically, the plan development process for authorities making a locality-wide commitment was six-12 months. This leaves less than 10 years to achieve net-zero in sectors (such as existing domestic housing, businesses) over which they have little direct influence.

Evidence of financial commitment is also patchy. Only 6% of declaring authorities made specific referenceto financing, publishing their provision alongside declaration statements. However, there is recognition by some that significant investment – in some cases of many billions of pounds – will be necessary during the next 20 years. West Midlands Combined Authority, for example, set out a commitment to spend £15bn on 'local energy projects'. Others, such as West Yorkshire Combined Authority and Woking Borough Council, have acknowledged that additional resources will be needed and stated their intention to factor these into future business planning. Several local authorities, including Ipswich Borough Council, Malvern Hills District Council and Richmond-upon-Thames London Borough Council, have already placed funds available for short term use.

The results of our follow-up assessment revealed mixed progress in councils' development of delivery plans after making declarations. Of the 42 local authorities sampled, 11 had either existing or recently published plans in place, while 14 expect to publish plans during 2020. For the remainder, there is no evidence that a plan will be in place by the end of this year. Of these, 13 local authorities are committed to a locality-wide 2030 target.

Encouragingly, 70% of authorities referred to building closer working practices with partner public agencies and the wider community in some form. However, 30% made no such reference, or had not published any information about public engagement. This reflected the findings of the APSE study showing little action from local authorities when it came to bringing the public into the action planning process.

“In the absence of a national plan or well-designed delivery models, authorities will choose their own finishing lines“

This is the first comprehensive review of local authority climate emergency declarations using source information available in the public domain. The results show a near-uniformity of political desire to tackle climate change, but local authorities are taking very different paths. This raises the question: how can they achieve their net-zero carbon commitments in the absence of a well-resourced, coherent national plan, and without fully engaged citizens who will have to bear a lot of the cost?

The impact of a relatively small popular lobby has shown local political leaders that they must at least be seen to take climate change seriously as a subject. However, in the absence of a national plan or well-designed and financed delivery models, local authorities will choose their own routes and finishing lines, shaped by a complex ecosystem of organisational, societal, economic and environmental factors. Political attention will be diverted to shorter-term agendas. Commitments to tackle climate change as an 'emergency' will inevitably experience dilution in the absence of strong leadership, clear planning and adequate resources over the long term. The scale of investment required to deliver net-zero is a critical matter of concern, as is the need for an honest appraisal of the likelihood of achieving target timescales.

The role of the citizen in the uptake of climate declarations has been significant and is reflected in the records of many council records. Each council needs to take its community with it, but there is insufficient evidence to show that this is happening. Although there is popular support, it could be argued that people will not buy into actions that will intrude upon their lives unless local authorities and others show how tackling climate change can improve their wellbeing and personal situations.

There are some wider issues, such as COVID-19 recovery planning, which will create challenges and opportunities for local authorities as they tackle the climate emergency. How authorities respond by refocusing economic and social policies, particularly at this time, will be critical to their success.

Peter Gudde, MIEMA CEnv, is a doctoral researcher at the University of Suffolk's Suffolk Sustainability Institute.