Companies need to step up and take responsibility for the plastic pollution they create – and soon, says David Burrows

Liz Goodwin was CEO at the widely respected Waste and Resources Action Programme (Wrap) for almost a decade, and currently leads the food waste programme at the World Resources Institute. If anyone can appraise the food sector’s performance on waste management, it’s her. In January, at a Westminster energy, environment and transport forum in London, she said: “The issues and potential benefits don’t feel real to individual companies. They don’t see the urgency, they still don’t see the business case and they don’t feel a burning platform.”

Six months on, I wonder if this is still the case?

Pressure to act on plastics had been steadily building, but the BBC’s Blue Planet II lit the touchpaper. Since then, we’ve had the government’s 25-year environment plan, along with consultations for new taxes on some single-use plastics. Companies have also been quick to commit to recycling more, using more recycled materials and even phasing out ‘avoidable’ single-use plastics. In some cases, they’re going plastic-free for all packaging (Iceland in the UK) or in dedicated aisles (Ezoplaza in the Netherlands).

‘Plastic’ has even been declared Children’s Word of the Year, following an analysis of the stories sent in to BBC Radio 2’s writing contest. “It’s been extraordinary to watch it unfold,” Goodwin tells me. “We’ve been banging this drum for years.”

Some might say Goodwin has been banging her head against a brick wall. Plastic pollution hasn’t happened overnight. It’s been more than two years since the Ellen MacArthur Foundation estimated there will be (by weight) more plastic than fish in the sea come 2050 and, according to a report in June’s National Geographic, virtually half of the plastic ever manufactured has been made in the past 15 years. Plastic is cheaper than the chips it cradles, so who cares what happens to it once your fingers are licked?

As little as a decade ago, the plastics industry’s attitude was – shockingly – that incineration remained the best bet for plastics. “I remember when I first started at Wrap in 2007, one of the first meetings I went to was with the British Plastics Federation and they told me exactly that – all plastics should be burnt,” said Goodwin in January. “I think if you went back to them now they would have a different story.”

Undoubtedly. Look at the BPF’s website and it proudly boasts of a 15% rise in recycling of plastic packaging in 2016, compared to 2015. “Our vision is to see 100% of plastic packaging reused, recycled or recovered,” the organisation’s director general Philip Law recently said. And we can expect to hear more about this positive side to plastics in the coming weeks and months: the BPF has just run a ‘Public relations for plastics’ event for its members, with presentations from experts in crisis management, social media and PR. I’ve been told a lobbying group has also been hired, most likely to bend the ear of politicians who are currently being swayed by public opinion on plastics.

It’s important to note that I don’t have a problem with plastics. I don’t believe that all plastics are bad, and kneejerk reactions to simply switch to an alternative can come at a cost (both economic and environmental). “Plastics aren’t inherently bad – it’s what we do, or don’t do, with them that counts,” suggested Sylvia Earle, National Geographic’s explorer in residence. I agree – though at some point we will need other solutions, because plastics aren’t infinitely recyclable and we can’t keep using oil to make more. Indeed, it’s the laissez-faire attitude that I have a problem with – the failure to think about the life cycle of materials, as well as the complete lack of transparency.

Having seen the stick Coca-Cola has received since acknowledging that it makes 128 billion plastic bottles each year, others have been reluctant to reveal their plastic footprints. In a recent investigation for Just-Food.com, I asked Mars, PepsiCo, Unilever and Nestlé how much plastic packaging they use; not one of them could (or would) say (though Nestlé has since promised to report the figure in its next annual report).

Supermarkets have been equally coy. The Guardian and consultants at Eunomia have estimated that the UK’s biggest eight supermarkets create more than 800,000 tonnes of plastic packaging waste every year. According to the charity Recoup, which promotes plastic recycling, 512,475 tonnes of plastic was collected from UK households in 2016, 512,000 tonnes of which was bottles, pots, tubs and trays. That leaves 287,525 tonnes somewhere else. (In fact, it’s far more than that, given Eunomia’s figures are likely an “underestimate” and don’t consider smaller stores or the food service and hospitality sector).

“The status quo is one of producer irresponsibility – packaging that’s unnecessarily wasteful, some that has no hope of being recycled, and too much being littered on land and sea,” said Eunomia chairman Dominic Hogg.

Poor recycling infrastructure hasn’t helped, of course. However, with a tight squeeze on council budgets and the emergence of 300 or so different collection systems, you could say collecting half a million tonnes of plastic is a remarkable achievement. In fact, local authorities are covering 90% of the cost of recovering packaging, according to the Environmental Audit Committee, which is why everyone is talking about extended producer responsibility.

Hit them hard, I say. For too long, food and drink companies have got away with doing very little, hiding behind (or completely ignoring) voluntary agreements such as Wrap’s Courtauld Commitment and fiercely opposing any form of new regulation. Look how long it took to introduce the carrier bag tax here; the to-ing and fro-ing must have cost the public sector millions. We can’t afford to dilly-dally again, but unpick the rhetoric and look more closely at some of the commitments and that’s exactly what is happening (and the sharp suits at BPF’s lobby firm will be told to press hard on the brakes of policy). Others will be doing the same when it comes to other potentially game-changing policies, such as a ‘latte levy’ on disposable cups or a national deposit return scheme.

“All this ‘low’ and ‘careful’ language is nonsense,” says Sian Sutherland, co-founder of A Plastic Planet, which is pushing supermarkets to introduce plastic-free aisles. Even Iceland, which is now seen as a pioneer when it comes to plastic reduction, could go faster (the retailer has committed to having entirely plastic-free packaging within five years) – and as for the UK Plastics Pact, that’s full of guff, she suggests. Even Goodwin, a fan of voluntary agreements, says it’s not yet clear what the companies involved will do and how they’ll get there. 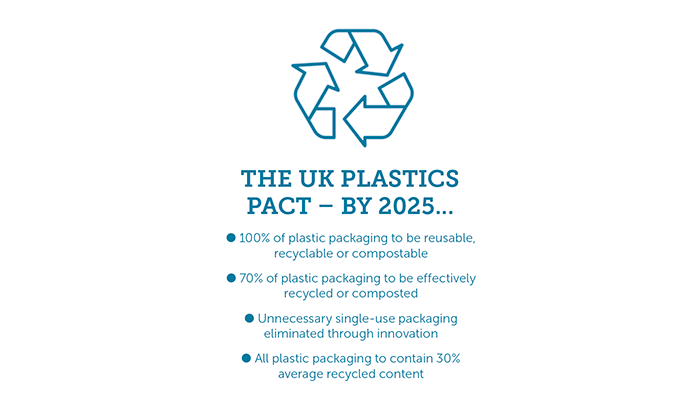 However, it’s the fourth – and some might say most critical – commitment where the pact really comes unstuck. By 2025, it states, the signatories should “take actions to eliminate problematic or unnecessary single-use packaging items through redesign, innovation or alternative delivery models”. In other words, it’s a promise to reduce plastic but with no accountable target. Wrap apparently didn’t know what number to put – but without one, how can we believe the sector is committed to reducing plastic use? And without a target, where’s the incentive to go further than tackling low-hanging fruit, such as plastic straws and film-wrapped coconuts?

BPF’s new vision states that “the plastics industry, government and wider society all want the same thing: to reduce plastic waste so we leave the environment in a better place for generations to come”. Fine words, but now it’s time to get on with it and deliver meaningful change.