Dr Michael E Mann is one of the world’s pre-eminent climate scientists – and also one of the most frequently attacked. Politicians, public figures and social media trolls have tried, and failed, to discredit his research during the past two decades – particularly his controversial 'hockey stick’ graph charting global temperatures during the past thousand years, made famous in Al Gore’s documentary An Inconvenient Truth.

With climate change denial no longer credible, his adversaries in the media, government and the fossil fuel industry have switched tactics, looking to blame individuals’ actions for the crisis while promoting a vision of inevitable doom.

In his latest book, The New Climate War, Dr Mann explains how we can fight back against the vested interests of fossil fuels and deliver the systemic change needed to avert climate catastrophe.

An assault on science

Described by some as “the most controversial chart in science”, Dr Mann’s hockey stick graph, depicting a sharp increase in global temperatures since the Industrial Revolution, was a prominent feature in the Intergovernmental Panel on Climate Change’s (IPCC) third assessment report. This report was key in the awarding of the 2007 Nobel Peace Prize to the IPCC and Al Gore.

However, US fossil fuel lobbying groups have since attempted to cast doubt on the research behind the graph by making unsupported accusations of data manipulation, while Dr Mann was also a central figure in the ‘Climategate’ scandal, when hackers obtained a large number of scientists’ emails in 2009. Despite several successful defamation lawsuits, these attacks have cast doubt on the science of global warming; he describes this as “an unfortunate distraction”. “We are much further down this road than we ever should have allowed ourselves to get, as a consequence of this disinformation campaign,” he says. “Regardless of how I might feel as a scientist, the much greater concern is how this assault on science has supported the fossil fuel industry’s agenda of inaction, and we have all paid the price.”

Dr Mann highlights how powerful vested interests have waged successful disinformation campaigns in the past – particularly the tobacco industry’s efforts to discredit the health threats of cigarettes. “The science of black holes, dark matter and multiple universes – these are far more speculative areas of science, and yet they are not attacked because there isn’t fundamentally a vested interest,” he says. “Whenever the findings of science find themselves on a collision course with powerful vested interests, there has been an effort to undermine and attack the science.”

However, with extreme weather becoming increasingly frequent, and new temperature records almost every year, it is no longer possible for the “forces of inaction” to credibly deny the science. “There is as much consensus among the world’s scientists about climate change as there is about gravity. These vested interests can’t deny the problem any more, so they’ve turned to these insidious, and in many ways quite nefarious, new tactics in their effort to block meaningful action.”

Recycling more, flying less and changing diets are just some of the ways we’ve been told we can slow climate change, but for Dr Mann, the inordinate emphasis on individual behaviour is the result of a marketing campaign to deflect blame away from fossil fuel companies and towards individuals. While he believes behavioural changes are part of the solution, he says there is no way to tackle climate change without substantial policy solutions.

“Too often, vested interests have been successful in focusing attention almost exclusively on individual action – to the exclusion of the policies that will hurt their profits,” he says. “We can’t allow them to make out that these individual actions are the totality of the response that’s needed, because we won’t achieve massive reductions in carbon emissions without deep systemic change – and we will only get that from policies and politicians who are willing to act on our behalf, rather than the polluters’ behalf.”

In 2004, the oil and gas giant BP unveiled its ‘carbon footprint calculator’ so people could assess how their normal daily life was impacting emissions. Although this may have seemed a useful tool in the fight against climate change, Dr Mann believes it was just another way to deflect blame onto individuals. “They did it because BP and other companies wanted us so focused on our own individual footprints that we would fail to notice theirs,” he argues. “A hundred polluting companies are responsible for 70% of our carbon emissions – you can’t make this stuff up.”

He says that some journalists have been “actively promoting misinformation and disinformation about climate change”, naming those connected to Rupert Murdoch’s media empire in particular. However, even well-meaning sections of the media have placed considerable emphasis on what we can do as individuals. “It’s not that they are acting as agents of the fossil fuel industry, it’s that the forces of inaction have been so effective that even well-meaning media outlets fall victim to their framing,” he explains. “You see that among climate scientists, too, because these forces have done such a good job of creating this echo chamber where their talking points are repeated over and over again, which ultimately penetrates into our mainstream discourse. It’s important we look out for that, realise we are all being played by these forces, and do not fall victim to them.”

Social media has become the new battleground for vested interests that are looking to delay climate action, Dr Mann says in The New Climate War, which argues that these vested interests have “pursued a divide-and-conquer strategy of sowing division among climate activists and advocates”. Although it’s not always clear who is behind certain social media accounts, he says, an increasingly large body of evidence suggests that state actors such as Russia are looking to shape climate policy using online bot armies. “Putin sees fossil fuels as Russia’s main monetary asset, and has used this cyber tactic to interfere with climate politics in various countries,” he says. “In France, there is some evidence that Russia played a role in the gilets jaunes uprising against carbon pricing, and you can see when armies are being mobilised online at particular moments.” 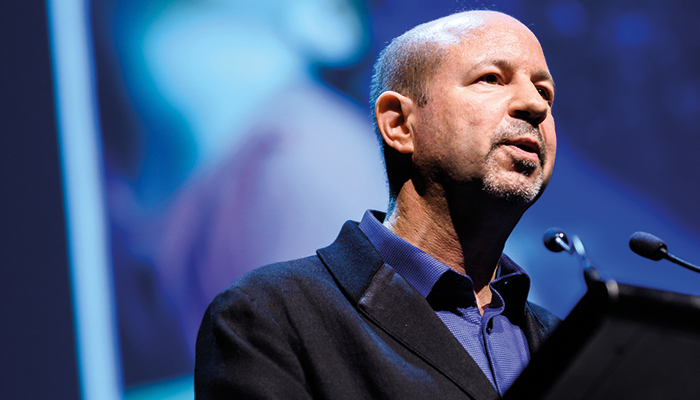 He also suggests that Russia’s alleged interference in recent US elections has been motivated by a half-trillion-dollar oil deal between Russia’s Rosneft andthe US’s ExxonMobil that was being prevented by sanctions – which Donald Trump had promised to remove. “The agenda of fossil fuel extraction and monetisation seems to have been central to Russia’s efforts to sow division in our global politics on climate.”

Divisive language is also used online to get us arguing about each other’s individual behaviour, such as whether we are vegan or not and how much we travel. “They get us arguing with each other using professional trolls, and once they get the argument going it is self-sustaining. That has been used very effectively in dividing climate advocates.”

Another tactic used by the vested interests of fossil fuels, according to Dr Mann, is pushing so-called ‘solutions’ to the climate crisis that could actually be detrimental to the environment. Former US secretary of state and ExxonMobil CEO Rex Tillerson has described climate change as “an engineering problem”, and Dr Mann says it’s clear he was talking about geoengineering. “There is a wide array of interventions – from carbon capture and storage, which on some level is a fairly safe way of proceeding, to the other end of the spectrum, like injecting sulphur dioxide into the stratosphere to reflect back sunlight, which comes with many unintended potential consequences. Some bad actors are using these as a crutch to take pressure off near-term emission reductions.” 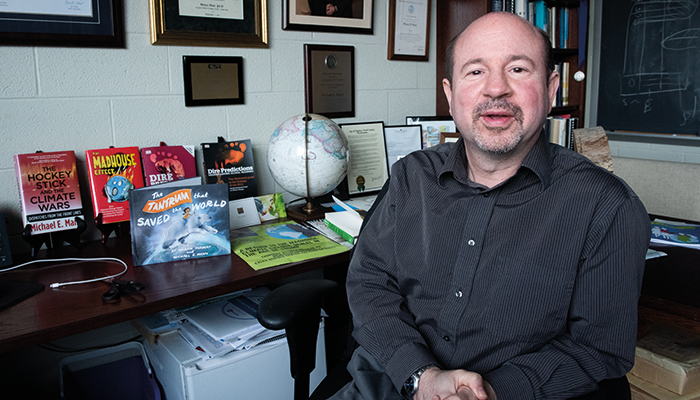 Taking a new approach to carbon pricing, allowing renewable energy to compete fairly against fossil fuels, and debunking false narratives are just three of the steps Dr Mann outlines in The New Climate War that could defeat the coalition of vested interests.

This will involve pushing back against “doomism”: the idea that trying to tackle climate change is pointless because it’s already too late. “There are some at the top who are using that framing to lead people down a path of disengagement,” he says. “It’s important for people to know that the science in no way supports the narrative of doom. There is still time to avert the worst impacts of climate change, but there is great need for agency and urgency.”

He says that there are strong reasons for “cautious optimism”, one of which is the youth climate movement spearheaded by Greta Thunberg, which has centred the conversation on fundamental issues of ethics. “It’s not just about science, economics, policy and politics, but ethics and our obligations to future generations,” he explains. “There is a moral authority that comes from children speaking out, and we need to support them to make sure their efforts are not in vain. They have cracked open the door for us and now we have to walk through it, which means using our voices and our votes, pressurising politicians, speaking out and doing everything to raise awareness about the crisis.”

Another reason for optimism is the range of ambitious emissions-reduction targets set by many major economies – perhaps most significantly the Biden administration’s commitment to a 50% reduction by the end of this decade. “However, that is relative to a baseline of 2005, and the latest IPCC report states that we need to bring them down by a factor of two relevant to where we are now,” Dr Mann says. “It’s a great pledge, but the devil is in the detail, and we need to flush out those details – especially in the months leading up to Glasgow. I would much rather be in the position we are in now than where we would have been had Trump got a second term, a scenario that I characterised as potentially ‘game over’ for the climate. It’s a night and day difference.”

For Dr Mann, the COVID-19 pandemic has magnified the “deadliness of science denial”, which he says can be measured in the hundreds of thousands of human lives that have been lost unnecessarily. He also hopes that the pandemic will help facilitate a new conversation around the kind of society we want to live in once the crisis has passed. “A microscopic organism turned our world upside down, and it’s led us to ask questions about whether we are on a sustainable course,” he says. “I like to think that’s an ongoing conversation about how we can work principles of environmental sustainability into our long-term strategic thinking as a civilisation, as individual economies and as a global economy.”

THE NEW CLIMATE WAR: THE FIGHT TO TAKE BACK OUR PLANET by Michael E Mann (2021) is published by Scribe