Health initiatives in parts of the UK are substituting social or green remedies for traditional drugs. Elisabeth Jeffries looks at the opportunities and challenges associated with this type of healthcare.

In parts of Dorset, GPs have been prescribing health walks, conservation activities and wildlife gardening instead of antidepressants for particular patients. The Natural Choices programme involves an unprecedented collaboration between doctors and environmental charities.

The initiative forms part of a recent health service trend in applying social and green prescribing – the use of local community and environmental resources for healthcare therapies. The movement has been gathering momentum over the past five years following pioneering campaigns by several doctors and environmentalists, and now includes a range of similar projects across the UK.

In January, the UK government incentivised such efforts further by stating that it supported the rollout of social and green prescribing. That announcement came not from the Department of Health and Social Care, but through the 25-year Environment Plan published by the Department for Environment, Food and Rural Affairs (Defra). Its statement is a key moment for activists in the healthcare field, who, for many years, have been advocating a rounded and preventative approach to public health that includes the natural environment. Whether the statement prefigures the full integration of environmental therapies into healthcare depends on follow-up action. Certainly the arguments have become more persuasive.

“First, a more holistic approach to health has been developing that recognises the community and natural assets. Second, people are making the case for a financial return on investment, which has also driven a lot of the interest in this.”

Several studies have shown the positive impacts of social prescribing on healthcare budgets, which has played a significant role in influencing policy makers. A study in Cornwall, for example, found that an investment of £127,000 into a GP referral service would yield an average return on investment of £3.12 over three full years per £1 invested, providing a dividend of £396,240. It would mean fewer GP and hospital visits, patient wellbeing improvements, an end to some patients’ repeat prescriptions and more patients returning to employment. If further evidence of this kind builds up, green prescribing may well become a more accepted choice by GPs themselves.

Clearly, their profession is the most likely group in the medical sector to benefit from this type of prescribing. Surveys regularly show that significant numbers of patients visit family doctors because they are lonely, for example, rather than because of an immediate medical condition. For these patients, and for some suffering from particular chronic conditions – both mental and physical – social and green prescribing may be appropriate.

The ‘green pill’ prescribed may not only resolve some of the patients’ psychosocial problems, but also, perhaps, help avoid deterioration in mental and physical health caused by the problem. It also improves the effectiveness of GP surgeries by channelling more GP attention towards patient needs that are better matched with their training.

Many research studies demonstrate the health effects of making use of, and viewing, the natural environment. Numerous investigations have shown, for example, that physical activity in natural environments has a more positive impact than either exercise or contact with nature alone. Plenty of evidence also exists on the positive health effects of either living near, or using, green spaces. Meanwhile, a series of studies that have been conducted since the 1980s are beginning to provide a substantial – but as yet incomplete – evidence base relating to the health and wellbeing effects of nature-based interventions.

A sound rationale is beginning to emerge for replicating the efforts that are ongoing in Dorset and other counties and cities. However, several factors may obstruct the fulfilment of this policy. One is that the ‘compassionate Conservative’ image that Defra may wish to project for political reasons could be short-lived. Another is the time span envisaged in the paper, which is five times as long as any government administration – future governments might well abandon the policy.

A third is the economic argument itself, which often provokes opposition in the politicised atmosphere of NHS finance. “When people make the case for social prescribing, sometimes there’s a temptation to make it on financial terms because money talks,” says Naylor. But in public sector healthcare, finance is not the only consideration. “It can’t be the only basis for the case, because it sets a precedent that you are investing in public health only to save money.”

Equally, the capacity to save money could be engineered into a justification for reducing budgets. Yet financial assessments indicate that hospitals and GPs have already experienced significant real-term funding cuts in recent years, so it makes sense to direct medical care more appropriately. The outcome from some of these rather contradictory policy signposts will be determined on the political battlefield.

In the meantime, if social prescribing were to be integrated across every clinical commissioning group, immediate barriers would need to be overcome – statutory local NHS organisations that plan and commission healthcare services. The most obvious is the structure underlying GP prescribing, which is geared towards local chemist shops or referrals to hospitals – a fairly compact arrangement.

In addition, GPs will have to operate as part of a consortium with environmental groups and health NGOs running green healthcare schemes.

They will need to create a social prescription loop into the community, while environmental groups will need to forge new relationships with GP surgeries.

Solutions to achieve this more complex arrangement have already been proposed. A pilot in Brighton in 2015 tested the possibility of introducing ‘community navigators’. Working as volunteers in 16 GP surgery practice teams, the navigators made 361 referrals. Many of the people referred had social or milder psychological problems. In one case, an isolated man whose wife had dementia was referred from the GP to a garden-sharing programme. Plenty of other types of green prescribing exist, such as care farming – working on a farm for health benefits, green gyms and group walks.

The Brighton pilot showed that environmental charities might face barriers when engaging with the GP surgeries in the first place. There were other challenges, such as culture differences between the health and voluntary sector, and whether there was capacity for developing new partnerships alongside an existing service. However, advocates of social prescribing are trialling the navigator concept in a few areas, to work through the problems.

To many activists promoting sustainable healthcare, the government’s decision to back social prescribing is a considerable step forward and possibly a sign of further change in this direction. It shows a change of emphasis from the post-war era, when massive progress in antibiotics and other drugs meant that less attention was paid to the environmental determinants of health.

Professor George Morris of Exeter University, a former science advisor to the Scottish government, is optimistic about the priority that may in future be placed on environmental matters in health policy using practices such as green and social prescribing.

“In the past few decades, medical research had relied on ‘black box’ epidemiology in which, if you have good computing power and consider behavioural risk factors such as smoking and diet, you examine these in relation to the disease in question. As a result, the notion that these diseases occur in a social and physical context is airbrushed out. The environment has been a casualty of that in policy-making,” he says.

Some post-war discoveries have also led to the individualisation of health. This, he says, encourages the prevalence of an “omnipotent health professional with a curative rather than preventative approach”. As a result, public health, which plans the wellbeing of the whole population, may take second place.

However, a different approach has become more apparent in recent years. Some of the change originates from various landmark studies funded by big philanthropic institutions or UN agencies, such as the World Health Organisation. Reports by the Organisation for Economic Cooperation and Development, for example, have shown that intervention in air pollution pays for itself, so it is an economically sound policy for both the environment and health. Publicity on air quality has since intensified, setting a precedent for further similar environmental health campaigns promoting public health.

Social and green prescribing: how it helps 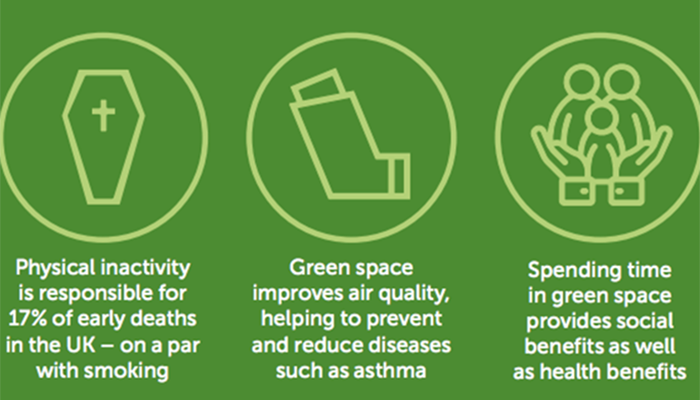 Elisabeth Jeffries is a journalist specialising in business and the environment