Soils are an essential reservoir for the human gut, and the largest microbial gene pool on earth. Their rich microbial diversity is essential for microbial ecology, nutrient cycling, biomass production and plant behaviour. They take thousands of years to make and few to destroy.

However, population pressures, modern lifestyles and farming practices are causing alarming losses. Globally, 33% of soils are degraded – rising to nearly 70% in Europe, causing the continent €50bn of losses per year. Only now are we beginning to grasp the links between soil and gut microbiomes (the genomes of all micro-organisms in an environment), and the fact that their decline may have consequences for human health.

From early childhood, the human gut is constantly colonised by microbes from food, water, air and direct contact with soil. Teeming with around 100trn micro-organisms, the gut microbiome instructs more than three million genes and creates thousands of metabolites that affect the host’s fitness, phenotype and health. Like an organ with diverse physiological and neurobehavioural functions, it is involved in the body’s immune system and metabolism, as well as prevention of infections. With modern lifestyles, the diversity of the human gut microbiome has declined drastically.

The soil’s rhizosphere and the human gut are both open systems overcrowded by microbes. Both microbiomes produce similar bioactive compounds, adjust gene expression and contribute to the host’s metabolism. Both protect their hosts against pathogens and regulate their immune systems (Figure 1). 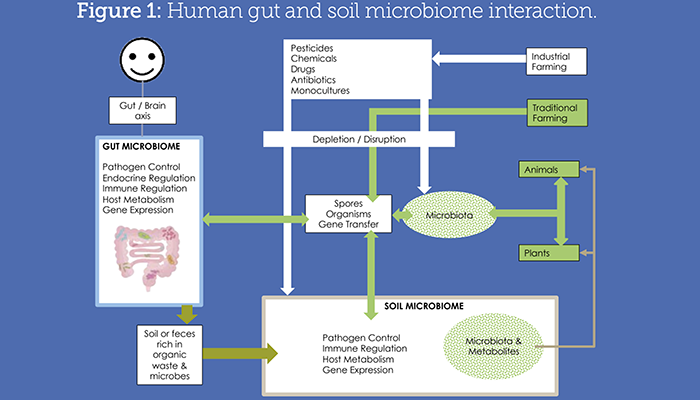 Scientists now believe the soil and gut microbiomes are two interrelated superorganisms that replenish each other with microbes and molecules. Their evolutionary and functional similarities also hold the potential for biological pathogen control.

Diverse gut microbiota are essential for the evaluation of environmental toxins and good health. A rich gut ecosystem may protect better against environmental factors because microbes with similar functions can compensate for missing species.

However, lifestyle factors – including diet, drugs and environmental chemicals – disrupt the gut microbiota, and play a greater role in shaping microbiota configuration than genetics. In primates, for example, a study has found that soil characteristics were 15 times stronger in predicting gut microbiome composition than host genetics (bit.ly/RSB_Grieneisen). This may be because soil affects which food is grown, or because of the soil microbes ingested with it.

Further animal and human studies have found that contact with soil is beneficial for gut health. While modern hygiene has reduced disease and mortality, it seems that soil pathogens and benign microbes stimulate human immune tolerance. Children raised in ‘poor’ sanitary environments such as traditional farms are less prone to developing autoimmune disorders, and in baboons and mice, an environment with lower soil biodiversity is linked to reduced gut microbial diversity.

In humans, the lowest bacterial diversity was found in the guts of urban dwellers, whereas the most secluded Amazonian tribes had the highest. Urban environments often provide less natural biodiversity and contact with beneficial soil microbes, and may concentrate pathogens, which can negatively affect the gut. Urban rewilding can increase contact with environmental biota and benefit the immune system.

The intensification of agriculture has led to the loss of soil and plant biodiversity, which affects human health as well as biochemical cycles. New evidence suggests that modern farming practices can persistently alter the animal and human gut microbiota.

Gut microbiota are very sensitive to drugs, diet and environmental chemicals. Pesticides cause changes in the gut microbiomes of various animal species, affecting lipid metabolism, inflammation and oxidative stress; for example, veterinary students who worked on intensive pig farms developed a persistent increase in pathogenic gut microbes and antimicrobial resistance genes. Antibiotics from crop and livestock production also end up in the soil, reducing its biodiversity and creating resistance in soil organisms.

There is a risk that our gut diversity and soil microbiomes deteriorate before we have fully understood their value. This includes the extent to which gut microbiota can mediate the damaging effects of environmental chemicals.

The Chatham House report Food systems impacts on biodiversity loss (bit.ly/Chatham_FoodSystems), the Dasgupta Review (bit.ly/Gov_Dasgupta), and upcoming international summits on food systems and biodiversity recognise the need to transform our food system. Programmes such as the EU’s Soil Health and Food Mission and the proposed UK Environmental Land Management scheme set the right intentions, but these initiatives must be followed by action.

DR Sibylle FREY is an environmental scientist and editor for the Millennium Alliance for Humanity and the Biosphere.