Food for nought: the UNEP probe From field to fork, food is wasted on a global scale. Huw Morris looks at a landmark UNEP probe into the issue

Inger Andersen has a thriller writer’s ability to grab attention. When asked to sum up global food waste, the United Nations Environment Programme (UNEP) executive director immediately cuts to the chase: “If food loss and waste were a country, it would be the third biggest source of greenhouse gas emissions,” she says. She points to the UNEP Food Waste Index Report 2021 (bit.ly/2RZDegm), which displays a series of unpalatable truths – not least that the drive for deliver net-zero carbon emissions will be much harder than previously thought.

Vast amounts of food end up in bins instead of on plates: around 931m tonnes of food waste were generated in 2019. “The weight roughly equals that of 23m fully loaded 40-tonne trucks – bumper-to-bumper, enough to circle the Earth seven times,” says Wrap international engagement director Richard Swannell, who worked on the research.

Of this waste, 61% came from households, 26% from the food service industry and 13% from retail. That is equivalent to 121kg for every person on the planet, UNEP says. Around 17% of total global food production may be wasted – 11% in households, 5% in food service and 2% in retail.

UNEP’s analysis also shows problems with supply chains. Food is wasted from field to fork; around 14% is lost before it even reaches stores. At the same time, around 690 million people are hungry, with more than three billion unable to afford a healthy diet. Food waste also accounts for 8-10% of global greenhouse gas emissions, while intensive farming is major cause of biodiversity loss. 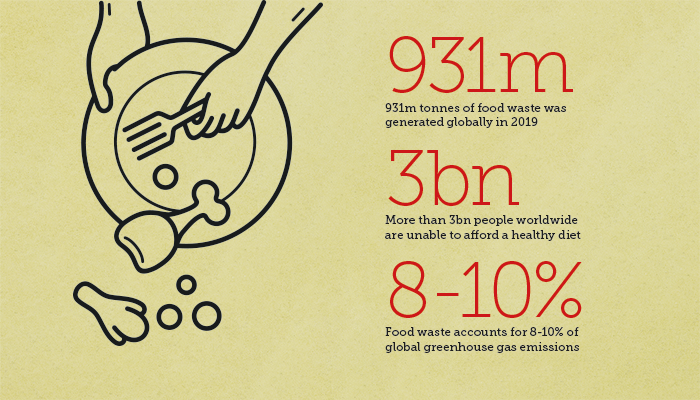 The UK has the highest recorded level of waste by households in northern Europe, at 5,199,825 tonnes a year. However, in terms of food waste per person, the UK (77kg) is below France (85kg) or Norway (81kg). Greece is Europe’s most profligate waster, squandering 142kg per person per year.

UNEP’s research is, to date, the most comprehensive data collection, analysis and modelling on the issue. It looked at data from 54 countries, although just 14 compile information in line with UNEP’s index. Estimates were derived from existing data points for the rest.

There are other gaps in the data. The countries surveyed are home to 75% of the world’s population, with little known about the situation in other nations. Only 23 countries provided estimates for food losses by restaurants or grocery stores. In short, most countries have yet to quantify their food waste.

Such shortfalls aside, the findings are still alarming. The amount of food wasted by consumers may be double the previous analysis by the UN’s Food and Agriculture Organisation in 2011, which used data from fewer countries.

A second revelation is that food waste is not confined to rich nations. Households in high-income countries waste an average of 79kg of food a year; in lower-middle income nations, that figure is 91kg. UNEP says there is insufficient data to track the problem in low-income countries.

“This was a big surprise, as previous research had suggested household food waste was largely a rich world problem,” says Swannell. “The report finds that in nearly every country that has measured food waste, it was substantial – regardless of income level.”

The findings cast doubt over whether Sustainable Development Goal (SDG) 12.3, which aims to halve food waste and reduce supply chain food loss by 2030, will be achieved. “Some countries and private sector actors have taken SDG 12.3 to heart,” says Andersen. “There is growing evidence of success in reducing food waste, though not at the scale needed to achieve the target.”

Swannell acknowledges that while UNEP’s research did not investigate the causes of food waste, other studies – particularly from Europe – suggest “a key factor is that most of us do not think we waste food in our homes and, as such, people do not think the issue is relevant to them”. Several international campaigns are now under way to tackle this problem (see Campaigning against food waste, above).

The findings should help countries to set food-waste reduction targets and create ways to track progress, UNEP says. But few countries have included reducing waste in their planned submissions under the Paris climate agreement, as highlighted by campaigners recently (see Food systems and COP26, left).

“Even if every other sector of the economy decarbonised, without addressing the climate damage caused by the food system we cannot remain below 1.5°C of warming,” says Martin Bowman, senior policy and campaigns manager at Feedback, which lobbies to transform food systems. “Tackling food waste is the low-hanging fruit, but there has been continued failure to take meaningful action.

“The reality is individuals do not want to waste food, but large food businesses profit from selling us more than we need. Over-purchase, and subsequent waste, are an integral part of the supermarket business model.”

November’s COP26 climate summit must tackle food systems to get the world on track for net zero, according to a coalition of campaigners.

More than 30 NGOs, academics, local authorities and industry bodies have written to COP26 president Alok Sharma calling for food systems to be made a priority at the Glasgow summit.

The letter, co-ordinated by Nourish Scotland, warns that net zero is unachievable without a transformation “in what we eat, how we farm, and how much food we waste”. Food is not one of COP26’s priority themes and, as host, the UK has an opportunity to show global leadership, it argues.

“We have to invest in the food and farming transition – and we have to start now,” says Nourish Scotland director Pete Ritchie.

In the UK, Love Food Hate Waste raises awareness via Food Waste Action Week and helps people cut waste with tools and support. These cover options such as planning shopping lists, being mindful about portion sizes, and learning how to store food and interpret label dates. Swannell argues this helped slash edible food waste by 31% per person from 2007-2018.

Meanwhile, the Courtauld Commitment 2025 is a Wrap initiative for food system organisations; they sign voluntary agreements to make production and consumption more sustainable. The move aims to cut the carbon and waste associated with food and drink by at least a fifth, and to reduce water stress.

A similar agreement exists in South Africa, where 12.6m tonnes of food is wasted each year – a third of the food available – and 60% of households are at risk of or experiencing hunger. Under the Food Loss and Waste Agreement, spurred by the Consumer Goods Council of South Africa and the nation’s Department of Trade, Industry and Competition, signatories commit to adopt SDG 12.3. The top priority is to prevent and reduce food loss and waste while redistributing edible nutritious surplus food.

In Mexico, where more than 35% of total food production is wasted, the Pact for Food is working with companies, trade associations, public institutions and consumer groups to reduce food waste by 50% in 10 years.