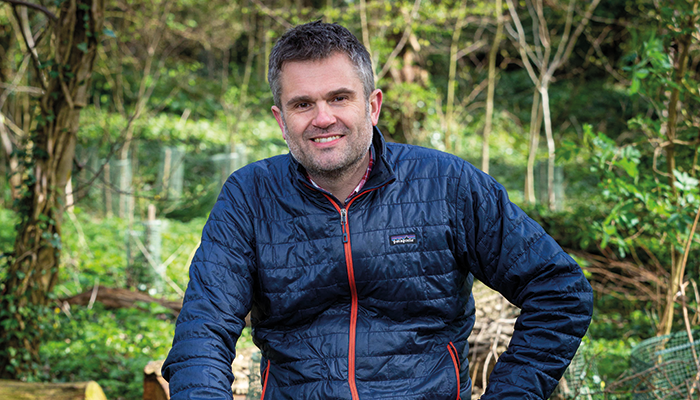 There must be few chief executives who, several months into the job, are yet to meet most of their colleagues face-to-face or spend a day in their organisation's office. This has been the reality for Craig Bennett, who took up the reins at the Wildlife Trusts at the beginning of April – just after the UK entered lockdown due to the COVID-19 pandemic.

With an inbox already bulging with post-Brexit threats to environmental protection, not to mention the climate and ecological emergencies, dealing with the impact of a global pandemic has been “immensely challenging,“ he says.

The Trusts' visitor numbers have soared during lockdown, and many reserves have suffered from vandalism, fly-tipping, illegal shooting of rare birds, and anti-social behaviour. Meanwhile, the need to close reserves' cafes and shops, as well as cancel fundraising events during the spring and summer season, has left the organisation with a gaping hole in its funding.

Numerous staff across the organisation's 46 regional trusts have been furloughed, its army of 38,000 volunteers has had to lay down tools, and site-based projects such as monitoring endangered species, managing wildflower meadows, controlling invasive species and assessing planning applications have been curtailed or postponed. “It's very frustrating to have to press pause when we're in an emergency,“ he says.

Nevertheless, Bennett remains upbeat about the opportunities that lockdown has brought – in particular, the public's widespread reconnection with local nature. “That's particularly important to us, because arguably the Wildlife Trusts are all about local nature.“

The Wildlife Trusts manages more than 250,000 acres across 2,300 nature reserves – 1,000 more than McDonald's has restaurants, Bennett points out – and 60% of the British population lives within three miles of one.

“COVID-19 has given us a glimpse of the future – how we might be able to travel a bit less, Zoom a bit more and spend more time with our families,“ he says. “Sometimes it takes shock events to show us what's possible and desirable.“

Though he does not believe that society will act on all these lessons, he does think that retaining just some of them might help us understand why nature is important – and thus why we need to put it into recovery.

The pandemic has also provided an opportunity for society to reach peak emissions, he says. “It's clear now that emissions in 2020 will be lower than 2019 because of COVID-19, which is a small silver lining to this otherwise horrific situation. I'm sure in 2021 they'll be higher than in 2020, but let's just make sure they're not higher than in 2019.“

For its own part, the Wildlife Trusts has pledged to reach net-zero by 2030. “Getting our own house in order is a big agenda for us,“ Bennett says, although he acknowledges that this will involve a large programme of work. The trusts vary in terms of staff numbers, so some have mapped out their scope one and two emissions and others have not.

Ensuring a coherent carbon cutting approach across the trusts will be a priority during the next year, he says. “What excites me about the Trusts' federated approach is that you can have an individual trust that innovates because it has the autonomy to do so, and this can show the way for other trusts. I hope we can be seen as a hotbed of innovation on this agenda.“

One opportunity trusts should look at, Bennett says, is forming partnerships with the private sector to construct new buildings such as visitor centres with on-site vehicle charging and renewable energy. Their land could also be used for carbon sequestration. “The Great Fen project in Cambridgeshire, where we're restoring a large amount of lowland peat, is sucking carbon out of the air that is equivalent to the emissions of 45,000 homes per year,“ he says.

Though he is wary of the term 'offsetting', Bennett believes that there could be a role for the Wildlife Trusts to be involved with nature-based solutions in the UK. “But we need to make it clear that we will need those in addition to cutting anthropogenic emissions at source,“ he stresses.

Another priority is improving equality, diversity and inclusion, both within the Trusts and in the wider environmental movement. In 2017, the Policy Exchange found that the environment sector was the second least diverse in the UK after farming.

“We can ask ourselves some tough questions about why this issue has been stuck in a white, middle class discourse for so long,“ he says. “We have a lot to do at the Wildlife Trusts on this. We've been leading the Our Bright Future project, a lottery-funded project to improve diversity and inclusion. We've just been discussing a new equality, diversity and inclusion strategy for the Trusts, and how we can put a spotlight on it to make sure we make rapid progress.“

The impact of Brexit

While the pandemic has dominated the headlines, the end of the Brexit transition in December looms large in many campaigners' minds. There are concerns that the government will break its promises on maintaining and enhancing environmental protections. Collaboration through the environmental coalition Greener UK will be vital if we are to carry out the enormous amount of scrutiny needed for post-Brexit legislation and policy, with limited resources, says Bennett.

The Environment Bill is now unlikely to make it onto the statute book before the end of the year and is nowhere near strong enough, he continues. In addition, the government's promised watchdog, the Office of Environmental Protection, will not be established for some time.

On trade deals, the government has repeatedly avoided opportunities to translate its promises to uphold environmental standards into legislation, he points out. Merely repeating promises is not good enough when the UK will be negotiating trade deals with different countries for years.

“We need to know that whoever is in power, whoever the minister is, and whether we're talking now or in five years' time, our current standards will be upheld,“ Bennett says. “We see no good explanation for not putting these things into law other than the fact that they might want to whittle them down.“

The NGO community is getting “more and more whispers“ out of Whitehall that there are plans to weaken the Habitats Directive, using the same phrases the government has used before – that it's been 'gold-plated', he says. “It's tiresome to hear the same old arguments, which have been proved time and time again to be factually wrong. As things stand, it does seem that those promises to maintain environmental protection post-Brexit will be broken.“

The autumn budget will be “the acid test“ for the government's intentions, he continues, as it will show the extent of its priorities. He believes the signs so far are not good, pointing to the £640m Nature for Climate Fund announced in February – which sounded good until it was compared with the £27bn promised for road building.

“As things stand, it does seem that those promises to maintain environmental protection post-Brexit will be broken“

Earlier in his career, Bennett was deputy director at the University of Cambridge's Institute for Sustainability Leadership and director of the Prince of Wales's Corporate Leaders Group on Climate Change. While he has seen a major change in the prevailing mainstream business narrative, which used to believe that environmental protections were barriers to economic success, he thinks politicians are still acting on this outdated assumption.

He is encouraged by the involvement of the approximately 3,000 businesses that work with the Trusts as corporate partners on projects in and around their operations in particular locations. However, he estimates that business literacy on wildlife and the ecological crisis is around 15 years behind business literacy on climate change.

“It took business a long time to understand how serious climate change is, how it fundamentally affects them and will result in changes to business models, and that companies that don't get it right could and should go out of business,“ says Bennett. “The same is true when it comes to ecological crisis, and I think a lot of those in the business community haven't realised that yet. What I hope is that some have, and that will spread.“