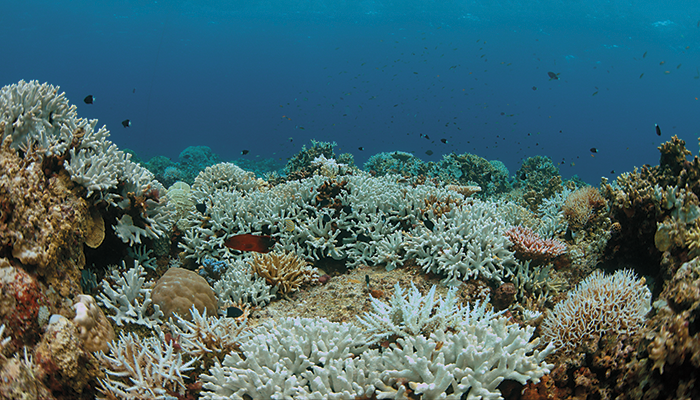 The period of time between severe coral bleaching events around the world has decreased fivefold in the past three to four decades, scientists have warned.

A new study published in the journal Science reveals that such events occurred just once every 25-30 years in the early 1980s, but that warmer temperatures have seen this figure rise to once every six years.

It argues that severe and prolonged bleaching can cause many corals to die. It can then take at least a decade to replace these corals, threatening the existence of marine ecosystems and the livelihoods of millions.

“Before the 1980s, mass bleaching of corals was unheard of, even during strong El Niño conditions,” says the lead author of the study, professor Terry Hughes of James Cook University, Australia.

“But now repeated bouts of regional-scale bleaching and mass mortality of corals has become the new normal around the world as temperatures continue to rise.”

More than a quarter of the world’s fish biodiversity is associated with coral reefs, which provide spawning, nursery, breeding and feeding grounds for numerous organisms, despite covering just 0.1% of the ocean floor.

Bleaching is a stress response caused by exposure to elevated ocean temperatures, causing the coral to turn a stark white colour, with the recovery period increasingly shortening as a result of global warming.

The study establishes a transition from before the 1980s, when bleaching only occurred locally, to an intermediate stage in the 1980s and 1990s, when mass bleaching was first recorded during warmer than average El Niño conditions.

However, this is now occurring much more frequently, with the research showing that tropical sea temperatures are warmer today during traditionally cooler periods than they were during hotter ones 40 years ago.

This is reflected in the Great Barrier Reef becoming bleached four times since 1998, including the first back-to-back events in 2016 and 2017.

“Reefs have entered a distinctive human-dominated era – the Anthropocene,” says the study’s co-author, Dr Mark Eakin of the National Oceanic and Atmospheric Administration in the US.

“The climate has warmed rapidly in the past 50 years, first making El Niños dangerous for corals, and now we’re seeing the emergence of bleaching in every hot summer.”