Designing in resilience to biological phenomena can help organisations to prepare more generally for the impacts of climate change, writes Tom Wycherley.

The potential impacts of climate change, and their effects on the way we live, are high on the agenda for international governments, businesses and academia. The World Economic Forum’s 2016 Global Risks Report listed the failure to mitigate and adapt to climate change as its top risk to countries and industries, in terms of impact – above weapons of mass destruction and terrorism. The report calls for action to build resilience against climate change and the other global risks that it identifies, including water crises, biodiversity loss and ecosystem collapse – all of which are themselves likely to be exacerbated by climate change.

While there is some uncertainty around every outcome that could result from climate change, a large proportion of the scientific community agrees that the climate is getting warmer, glaciers and ice sheets are shrinking and sea levels are rising. Human influence on climate change – via greenhouse gas emissions and other drivers – is the highest it has been in history. This is ‘extremely likely’ to be the dominant cause of global warming, according to the Intergovernmental Panel on Climate Change’s Fifth Assessment Report 2014.

To reduce and manage the effects of climate change, it will be necessary to tackle and mitigate its root causes – but we will also need to adapt existing systems to meet the challenges posed by a changing environment. To do this, we must design resilience to climate change into our infrastructure, in both the shorter and the longer term.

Building defences to natural hazards has traditionally focused on ensuring that infrastructure can withstand a high level of physical change or risk, such as floods and heat. While this provides resistance to some of the potential impacts of climate change, thought-leading organisations are widening their design scope to include building in resistance to biological phenomena or extreme biological events that could arise from climatic change. The ability of an organisation to mitigate the risks and manage the impacts from existing biological phenomena provides an indication of how resilient an organisation might be to climate change, what measures can be put in place and what can be achieved.

What are biological phenomena?

Biological phenomena are remarkable events – in the sense that they are uncommon and extraordinary – which test the resilience of organisations’ infrastructure and resources. In many sectors, such as the civil nuclear industry, biological phenomena are considered to be within the scope of natural hazard safety cases. However, since the release of the revised ISO 14001:2015 standard, they should become more prevalent within organisations’ environmental risk registers.

In the UK, many types of biological phenomena pose a credible risk to organisations in a range of industries. These include insect swarms, toxic algal blooms, increased biofouling, jellyfish swarms, rodent infestations and bacterial or viral epidemics. Any of these can lead to a variety of hazards and related consequences. While the impacts of climate change on ecological systems will vary greatly, there is evidence to suggest a growing correlation between biological phenomena events and a warming climate. Consequently, under-predicted climate change scenarios, the frequency of their occurrence and the severity of what are defined as (acute) biological phenomena are likely to increase.

The parallels between today’s biological phenomena and tomorrow’s climate change impacts are uncertain, but there are enough similarities to suggest that an organisation’s ability to withstand acute biological phenomena might serve as a measure of its ability to endure future climatic change. For an organisation to develop strategies to withstand the effects of damaging environmental hazards, a holistic approach is needed.

If an organisation recognises that the biological phenomena posing a risk to it today indicate where future risks from climate change may arise, it can start to test its resilience measures.

In the marine environment, for example, rising sea temperatures might contribute towards an increase in biological hazards, such as excessive vegetation growth or biofouling on marine structures. Mitigation to protect the asset from biological fouling should already be in place, but would significantly more biological fouling – due to warmer water, for example – undermine or overwhelm the effectiveness of current measures?

For instance, an increase in biological fouling could create additional drag that results in structural integrity problems for undersea pipelines and marine platforms. This could be compounded when combined with other natural hazards, such as extreme weather. For such assets, an organisation would need to identify how much growth the asset could take within increasingly prevalent extreme weather scenarios before it failed or was no longer safe. In effect, the organisation would be identifying how much redundancy was in place to protect the asset against predicted climate change scenarios.

By recognising the potential risks that natural hazards create, companies can reduce their risk, ensure continuity of operations, safeguard infrastructure and protect their business. 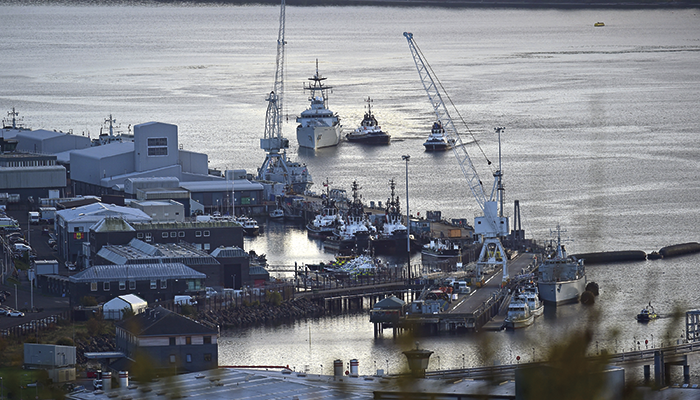 Frazer-Nash researched these biological phenomena to understand what might influence their occurrence and scale. The research also considered the potential consequences of biological phenomena for the naval base’s structures, systems and operations. Frazer-Nash produced design guidance that offered best-practice engineering techniques, operational processes, and engineered and administrative safeguards that could manage the risks of biological phenomena. It included a recommended strategy for compliance with safety, management and design principles.

Tom Wycherley is an environmental consultant at Frazer-Nash Consultancy and a specialist in marine biology and coastal ecology.